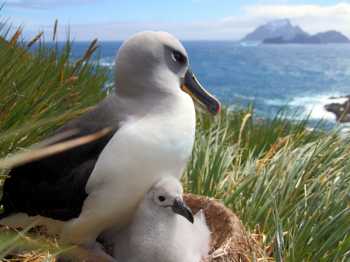 José Seco (Department of Chemistry, University of Aveiro, Portugal) and colleagues have published in the journal Environmental Pollution on mercury levels in Southern Ocean biota, including by analysis of feathers of chicks from five ACAP-listed albatrosses and petrels collected on Bird Island in the South Atlantic.

“Biomagnification of mercury (Hg) in the Scotia Sea food web of the Southern Ocean was examined using the stable isotope ratios of nitrogen (δ15N) and carbon (δ13C) as proxies for trophic level and feeding habitat, respectively. Total Hg and stable isotopes were measured in samples of particulate organic matter (POM), zooplankton, squid, myctophid fish, notothenioid fish and seabird tissues collected in two years (austral summers 2007/08 and 2016/17). Overall, there was extensive overlap in δ13C values across taxonomic groups suggesting similarities in habitats, with the exception of the seabirds, which showed some differences, possibly due to the type of tissue analysed (feathers instead of muscle). δ15N showed increasing enrichment across groups in the order POM to zooplankton to squid to myctophid fish to notothenioid fish to seabirds. There were significant differences in δ15N and δ13C values among species within taxonomic groups, reflecting inter-specific variation in diet. Hg concentrations increased with trophic level, with the lowest values in POM (0.0005 ± 0.0002 μg g−1 dw) and highest values in seabirds (3.88 ± 2.41 μg g−1 in chicks of brown skuas Stercorarius antarcticus). Hg concentrations tended to be lower in 2016/17 than in 2007/08 for mid-trophic level species (squid and fish), but the opposite was found for top predators (i.e. seabirds), which had higher levels in the 2016/17 samples. This may reflect an interannual shift in the Scotia Sea marine food web, caused by the reduced availability of a key prey species, Antarctic krill Euphausia superba. In 2016/17, seabirds would have been forced to feed on higher trophic-level prey, such as myctophids, that have higher Hg burdens. These results suggest that changes in the food web are likely to affect the pathway of mercury to Southern Ocean top predators.”