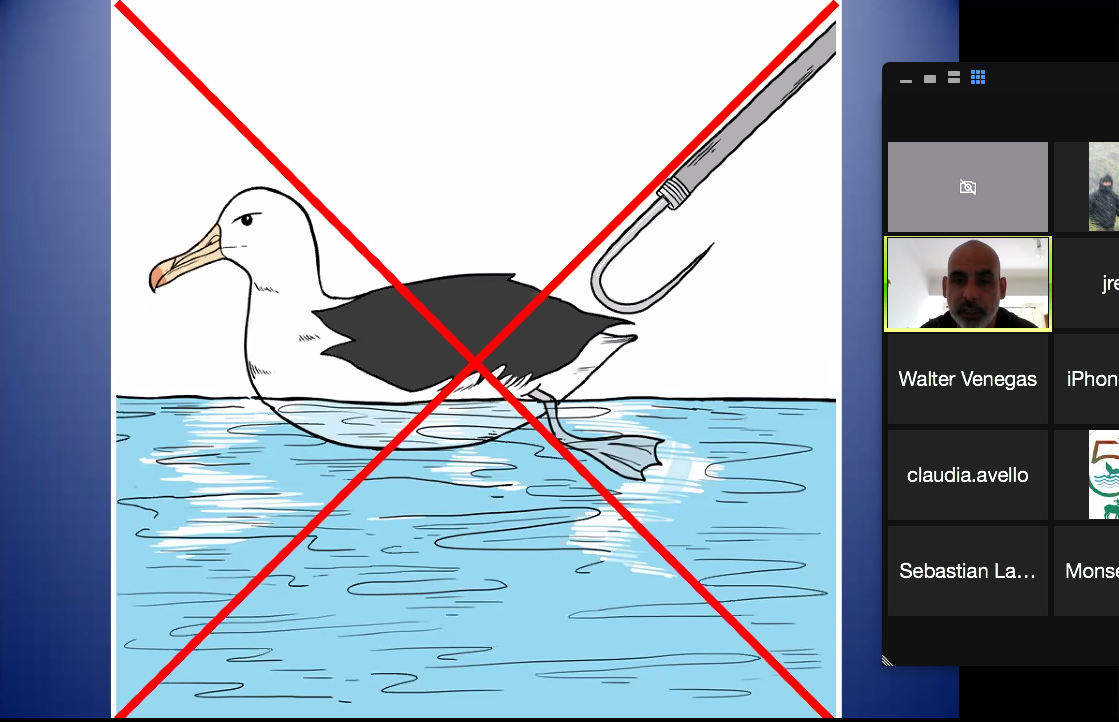 Cristián G. Suazo and Patricio Ortiz-Soazo of Albatross Task Force - Chile have produced two infographics in Spanish that illustrate seabirds at risk to bycatch to aid fishing captains in their required self-reporting via logbooks of the birds seen associating with their vessels during sets.  The “quick guides” (Guías rápidas) also illustrate mitigation measures for the demersal trawl fishery for South Pacific Hake Merluccius g. gayi and crustaceans, and for purse-seine fisheries for sardine, anchovy and the Chilean Jack Mackerel Trachurus murphyi in south-central Chile. 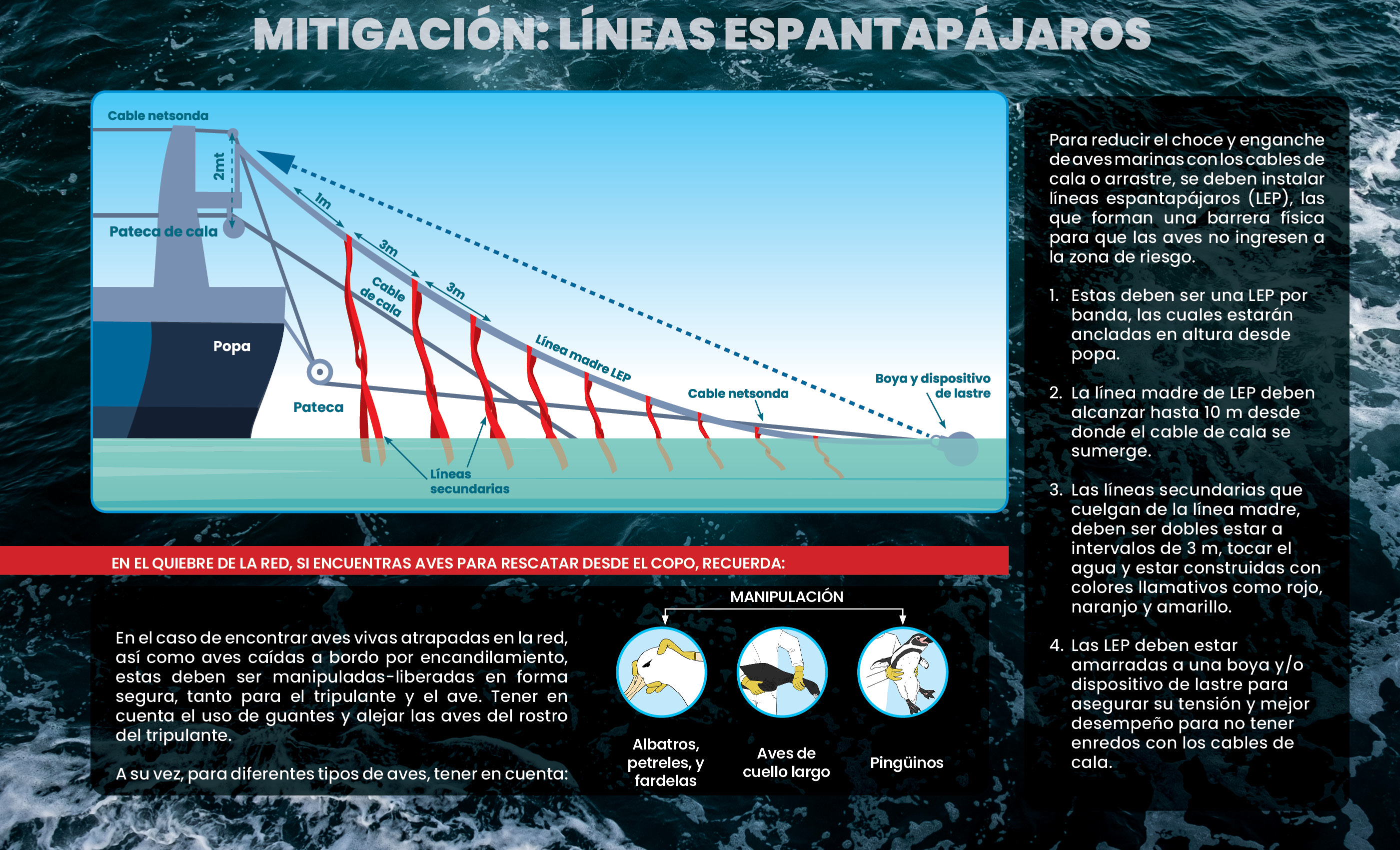 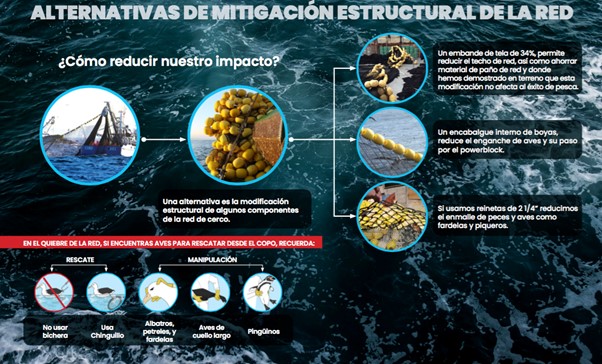 Mitigation measures for the purse-seine fishery

The two infographics have been made as part of a collaborative agreement signed in 2019 between ATF-Chile and the Association of Industrial Fisheries of Chile (Asociación de Industriales Pesqueros, ASIPES) and their associated companies.  The association consists of six purse-seine and two trawl companies with c. 6500 employees in one of the largest fishing regions in Chilean waters.

Cristián writes to ACAP Latest News:  "In the context of purse-seine fisheries this material was produced from fieldwork by ATF-Chile in collaboration with small-scale purse-seine associations in the ports of Talcahuano, Coronel, Queule and Valdivia, with the key support by Blumar Seafoods also including mitigation and best practices onboard for purse-seine crews. Besides, in demersal trawl fisheries, this information is part of the trials with ad hoc bird-scaring lines in the fishing areas of south-central Chile with the support of PacificBlu and Camancha Pesca Sur."

The quick guides are being made freely available in the form of printed booklets and posters to Chilean fishing captains and crews.  They are also currently being used as supplemental material for training in mitigation and best practices onboard, including the safe rescue and handling of albatrosses and other seabird species.  Workshops directed at fishers and fishing companies run remotely online due to pandemic restrictions commenced this month. 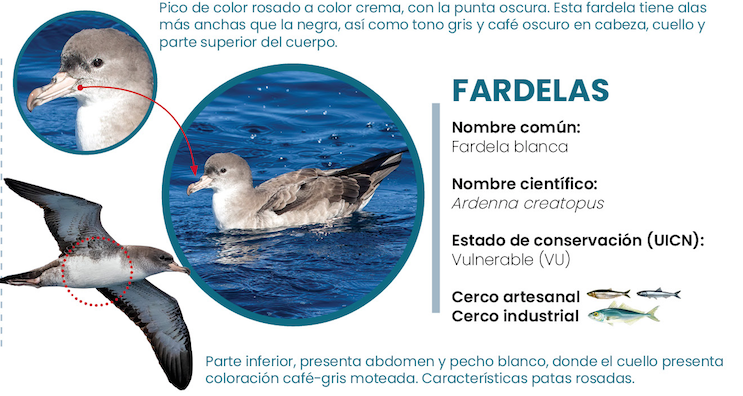 It is considered that the guides could usefully be used by other Latin American countries that suffer from seabird bycatch in their fisheries, with an emphasis on the seabird species associated with the Humboldt Current System, such as the ACAP-listed Pink-footed Shearwater Ardenna creatopus.

Production of the “quick guide” infographics has been supported by the USA’s National Fish and Wildlife Foundation and the UK’s Royal Society for the Protection of Birds.

With thanks to Cristián G. Suazo.