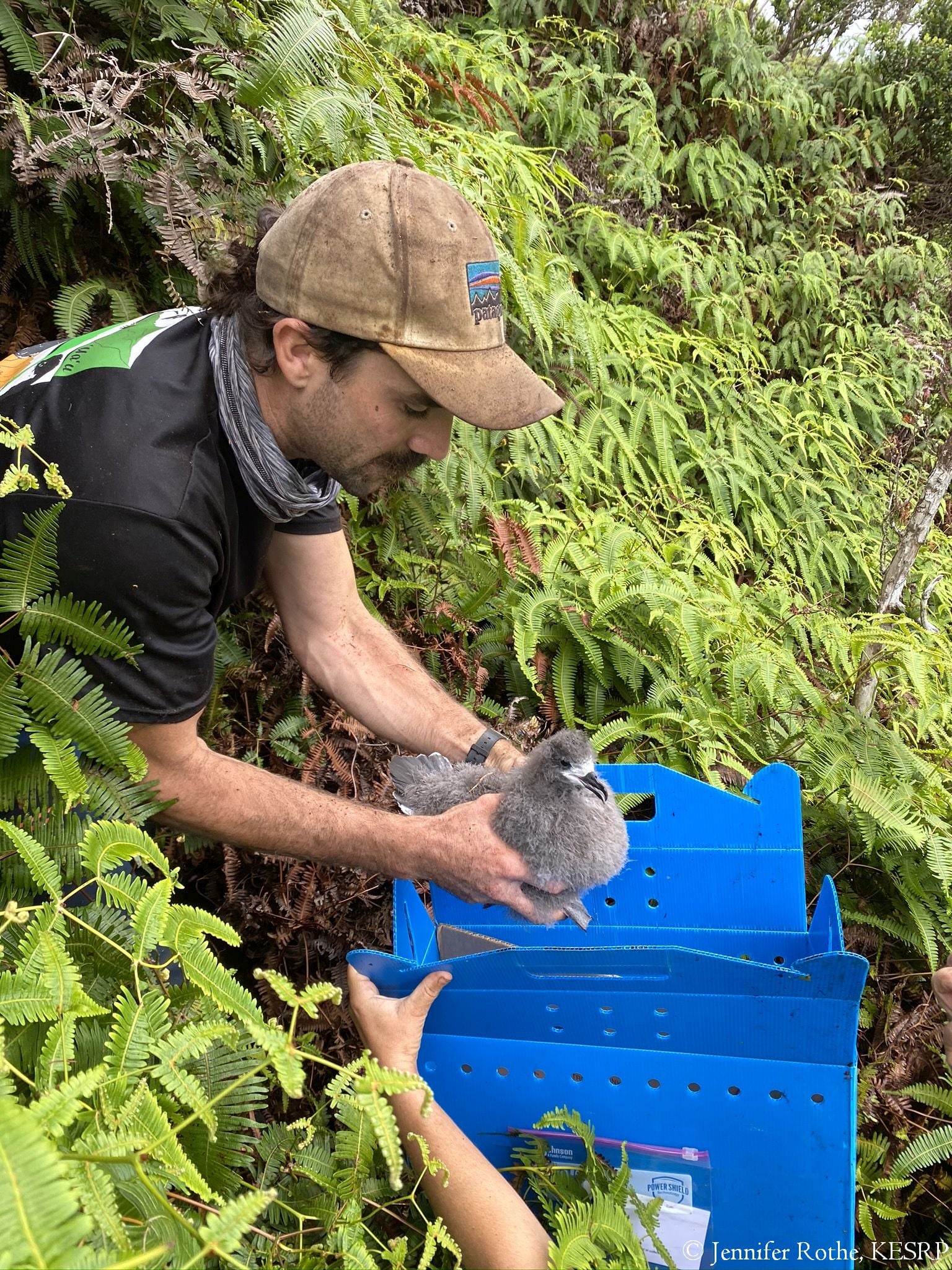 A Hawaiian Petrel chick is placed in a carrying box ready for its helicoper flight down the mountain, photograph by Jennifer Rothe, Kaua'i Endangered Seabird Recovery Project

Following “a hike, a quick helicopter ride and a road trip” and despite some challenges with the weather, the first day of translocating globally Endangered Hawaiian Petrel Pterodroma sandwichensis from the mountainous Hono o Na Pali Natural Area Reserve on the Hawaiian island of Kauai last week was declared a success by the Kaua'i Endangered Seabird Recovery Project.  Twelve downy chicks were transferred to their new home within the predator-proof fence at the coastal Nihoku Ecosystem Restoration Project site with a further eight chicks collected the next day and placed in artificial burrows.  For the next 30-60 days the chicks will be hand fed and cared for by the Pacific Rim Conservation’s translocation team.  The 20 petrel chicks form the sixth and final instalment of translocations aimed at creating a new seabird colony at Nihoku within the Kilauea Point National Wildlife Refuge.

Another Hawaiian endemic, the globally Critically Endangered Newell’s Shearwaters Puffinus newelli, has also been the target of chick translocations to the Nihoku site each year since 2016.  Over half of the 20 shearwaters translocated this year have now fledged.  Which of the two threatened seabird species will be the first to breed within the fence – perhaps the petrel as already several fledglings of the 2017 cohort have been seen back in their “childhood” burrows as returning adults?  But maybe both will be pipped by the three Kermadec Petrels P. neglecta which were unexpectedly filmed a few months ago exhibiting breeding behaviour on the ground inside the fenced area.  If they do this itwill be “the first breeding record for not only Hawai’i but the entire Northern Hemisphere” for this southern hemisphere gadfly petrel.

Information from the Kaua‘i Endangered Seabird Recovery Project and Pacific Rim Conservation Facebook pages.  With thanks to Andre Raine and Lindsay Young.