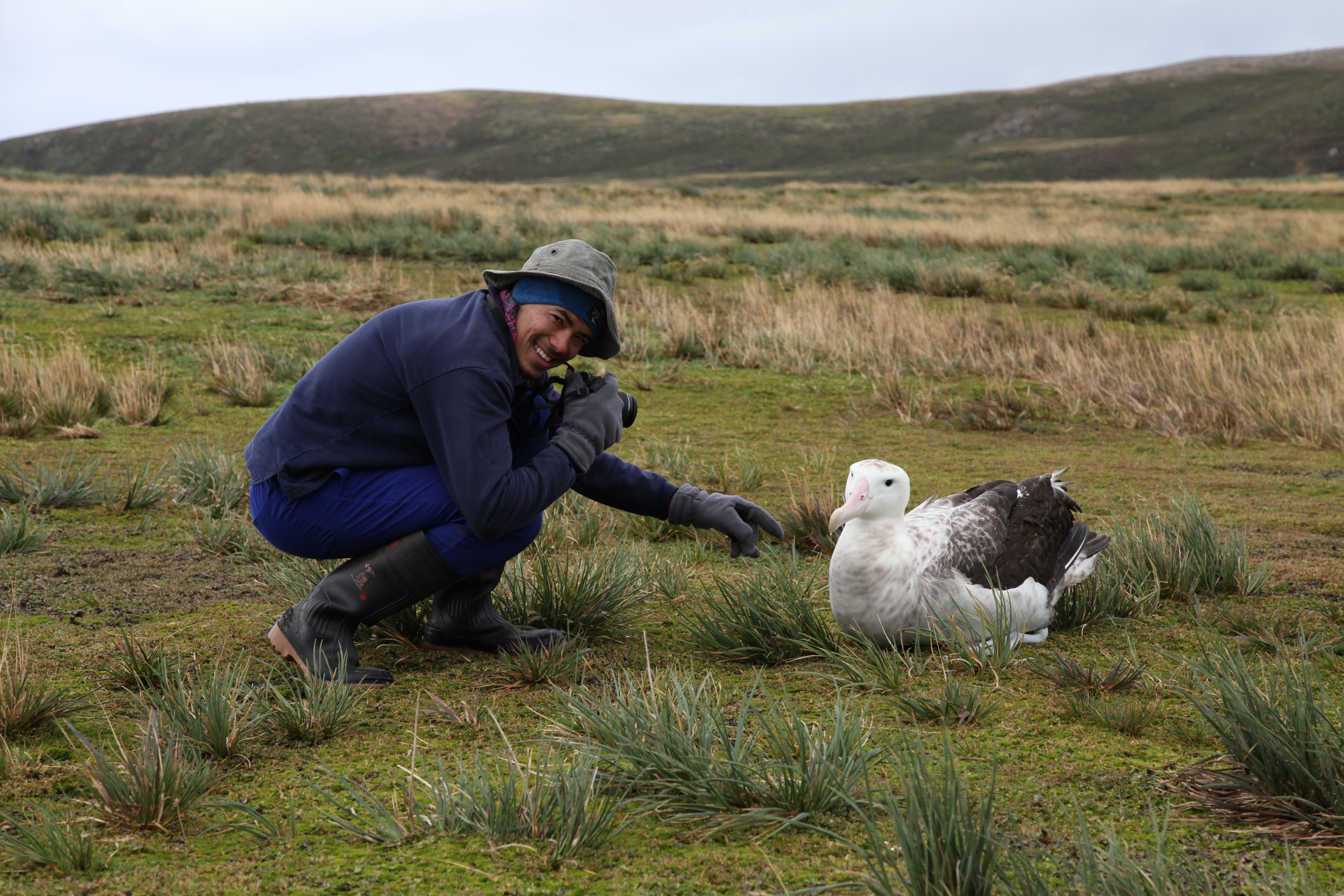 Alexis Osborne, recently awarded the degree of Master of Science for his study of moult in albatrosses and giant petrels, writes to ACAP Latest News:

“I started my journey to my first sub-Antarctic island in 2014 not knowing that this was going to be the start of big things.  As a young boy growing up in the arid Northern Cape Province of South Africa, I never dreamt of travelling at sea for days on end, let alone living on islands for a part of my life.  My first voyage was to Marion Island where I spent a year and where I also fell in love with seabirds.  I started collecting data while on Marion for an Honours project which I started upon my return to South Africa.  During 2017 I was fortunate to return to Marion Island, but also visited Gough Island and later that year Antarctica as well for their takeover periods. During my visit to Gough Island I knew immediately I wanted to stay for longer and when the opportunity presented itself in 2018 to return to Gough Island for a year, I grabbed it with both hands, not knowing I would be staying for two years.  I recently finished my degree of Master of Science in Biological Sciences at the University of Cape Town’s FitzPatrick Institute of African Ornithology.  I am currently still living on Gough Island and enjoying every moment but also looking forward to returning to South Africa.” 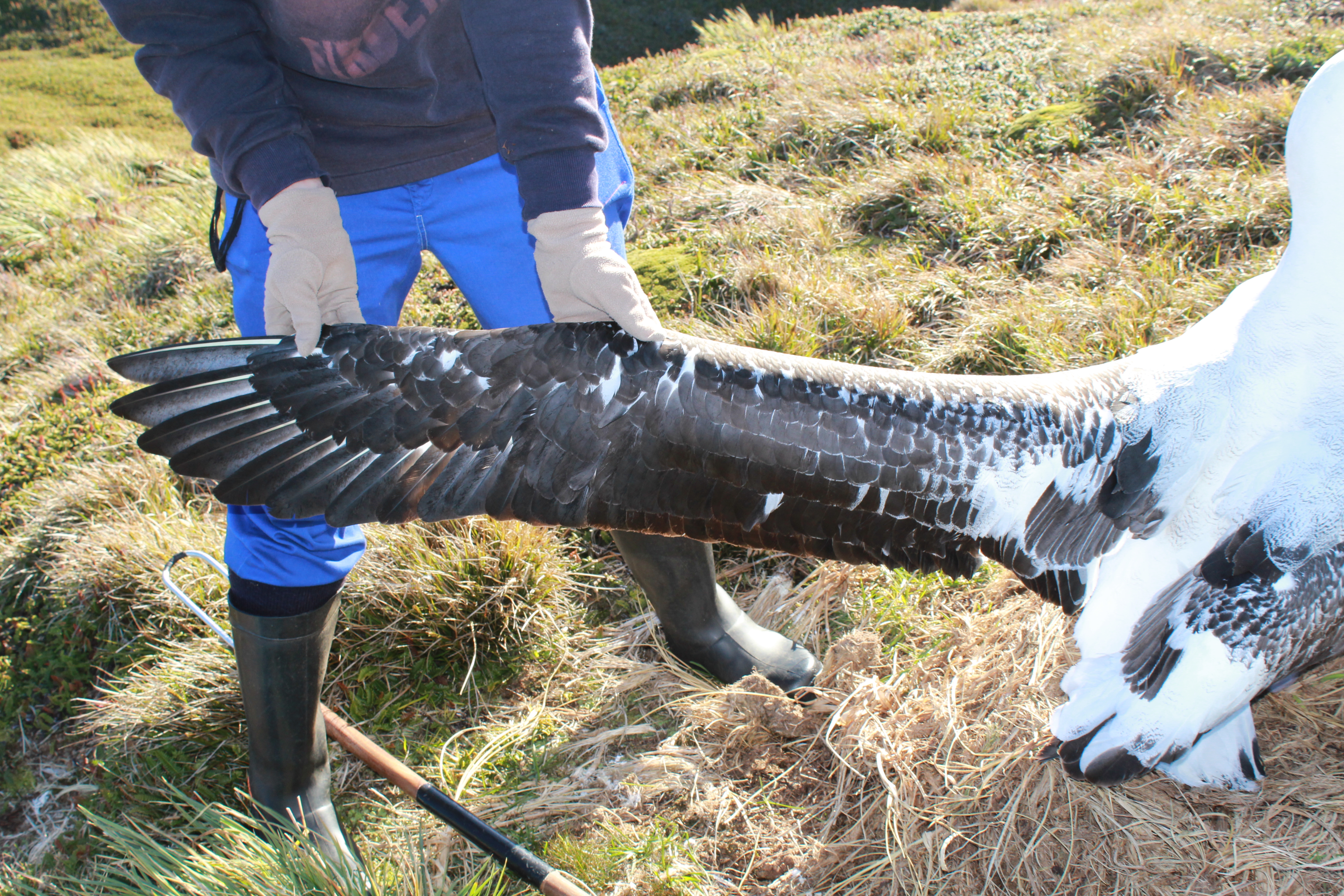 “Moult is an energetically demanding process for birds, and the replacement of flight feathers impacts flight performance.   As a result, few birds overlap moult with other key activities such as breeding or migrating.  Feather growth rates show little change in relation to body size, so large birds with long flight feathers take a long time to grow individual feathers, making their moult even more challenging.  Unless these birds can afford to become flightless for several weeks while they replace all their flight feathers simultaneously, many large birds lack sufficient time to breed and replace all their wing feathers each year.  As a result, they have evolved complex moult strategies that replace a subset of feathers each year.  Albatrosses and giant petrels are prime examples of birds facing this challenge.  This study focusses on Wandering Albatrosses (Diomedea exulans) and Northern Giant Petrels (Macronectes halli) breeding at Marion Island and Southern Giant Petrels (M. giganteus) at Gough Island.  I explore primary and secondary moult patterns in Wandering Albatrosses and secondary and greater secondary coverts in giant petrels in relation to breeding activity.

I used digital photography to record the wear patterns in the wings of Wandering Albatrosses and giant petrels. Using photographs of upperwings of marked individuals over time allowed the opportunity to track changes in the wear pattern among specific feathers, although scoring feather wear from images works better for darker feathers. The rate of wear among secondaries and their coverts differed across the wing, with the inner feathers wearing faster than the central feathers. Photographing the extended wings of albatrosses and petrels incubating eggs had no impact on hatching success. Using this method I was able to test the often held assumption that wing feather moult is largely symmetrical. In Wandering Albatrosses, moult symmetry was greatest in outer flight feathers, especially primaries. However, the pattern of increasing asymmetry towards the body was not consistent; inner primaries showed less symmetry than outer secondaries and inner secondaries were moulted with greater symmetry than central secondaries. Giant petrels preferentially replaced the inner and outer secondaries and the inner and outer greater secondary coverts, and feather symmetry was greatest in these feathers. All three species indicated some asymmetry in all feathers that had an incomplete annual moult. Depending on the question being asked, I recommend scoring both wings when investigating moult patterns.

In summary, the assumption that breeding activity, and thus the time between breeding attempts, influences the extent of moult in large birds with incomplete wing moults was supported for Wandering Albatrosses and Northern Giant Petrels. However, time available for moult explained only a small proportion of individual variation in moult extent in these species. Southern Giant Petrels replaced a similar mass of flight feathers, irrespective of breeding outcome. My results suggest that factors other than time between breeding attempts are important in determining the extent of wing moult.

My study highlights the important tradeoffs large birds are required to make when balancing moult and reproduction. Annual monitoring of moult patterns in known individuals provides a valuable tool to better understand moult patterns in these large, long-lived birds.” 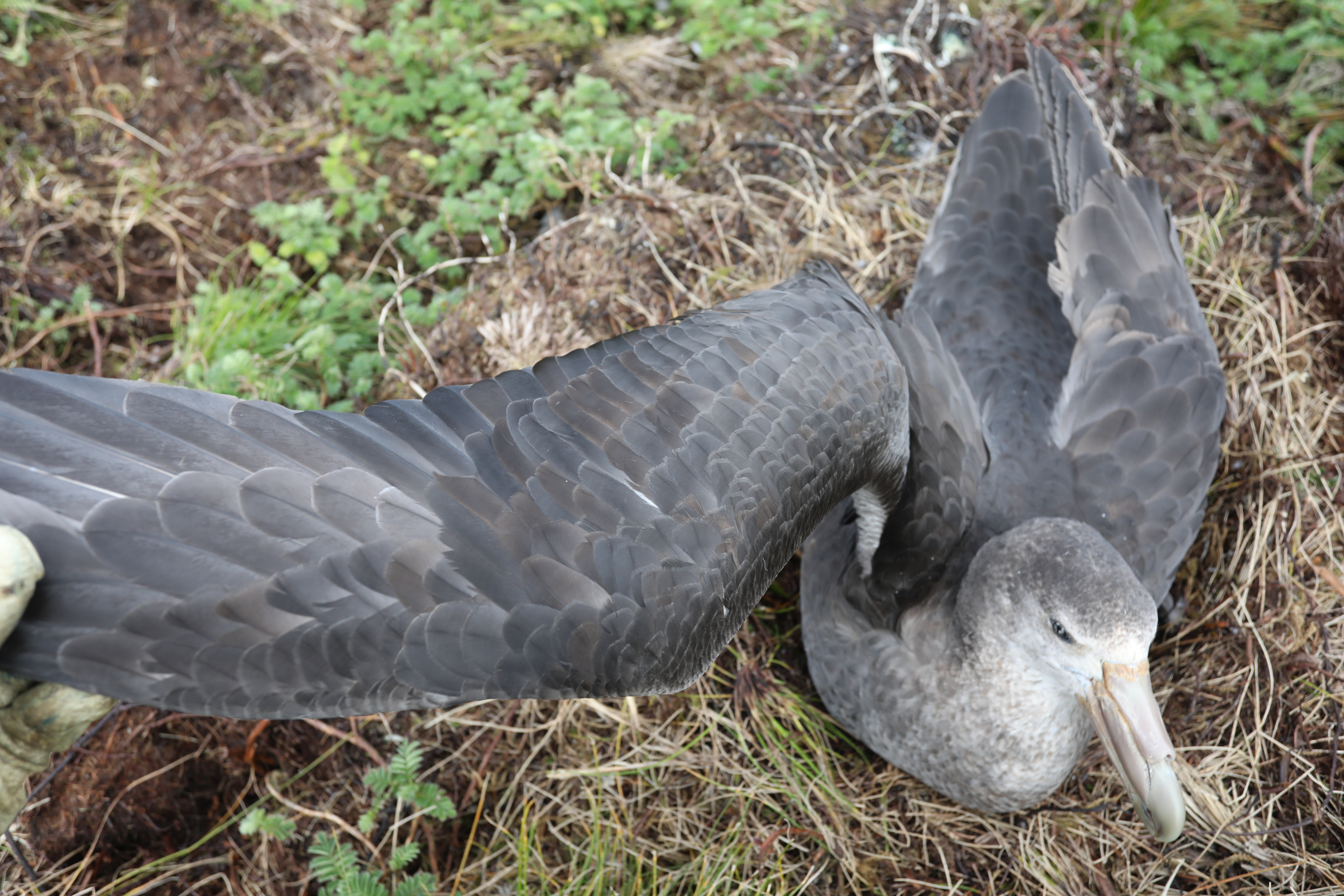 A Southern Giant Petrel on its nest on Gough Island, photograph by Peter Ryan

With thanks to Alexis Osborne.

NOTE:  the thesis will be available online after Alexis officially graduates later this year.