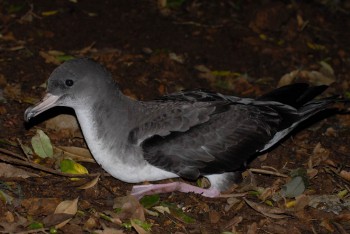 “Alien species are a driver of biodiversity loss, with impacts of different aliens on native species varying considerably. Identifying the contributions of alien species to native species declines could help target management efforts.  Globally, seabirds breeding on islands have proven to be highly susceptible to alien species.  The breeding colonies of the  pink-footed shearwater (Ardenna creatopus) are threatened by the negative impacts of alien mammals. We combined breeding monitoring data with a hierarchical model to separate the effects of different alien mammal assemblages on the burrow occupancy and hatching success of the pink-footed shearwater in the Juan Fernández Archipelago, Chile.  We show that alien mammals affected the rates of burrow occupancy, but had little effect on hatching success.  Rabbits produced the highest negative impacts on burrow occupancy, whereas the effects of other alien mammals were more uncertain.  In addition, we found differences in burrow occupancy between islands regardless of their alien mammal assemblages.  Managing rabbits will improve the reproductive performance of this shearwater, but research is needed to clarify the mechanisms by which alien mammals affect the shearwaters and to explain why burrow occupancy varies between islands.”