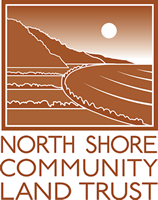 In recent years a few pairs of globally Near Threatened Laysan Albatrosses Phoebastria immutabilis have attempted to breed on the north coast of the Hawaiian island of Oʻahu at Kahuku Point (also known as Kalaeokaunaʻoa).  However, it was only in the 2018/19 season after years of failed attempts that three chicks fledged from the seven eggs laid, a success attributed to reduced disturbance (click here).

With advice from Dr Sheldon Plentovich, U.S. Fish & Wildlife Service’s Pacific Islands Coastal Program Coordinator, the North Shore Community Land Trust has taken up the stewardship of guarding the breeding birds against disturbance and improving their habitats as part of its mission from 1997 “to protect, steward, and enhance the natural landscapes, cultural heritage, and rural character of ahupuaʻa (land divisions) from Kahuku (Oʻahu’s northernmost point) to Kaʻena (Oʻahu’s westernmst point)”.

Following an approach to the trust, its Executive Director, Adam Borrello, has replied  to ACAP Latest News in support of this year’s inaugural World Albatross Day: “As we remove invasive species and clear the way for more natives to thrive, the coastal strand habitat at Kahuku Point is returning to a more pristine condition.  We see the presence of the albatross as their endorsement of our restoration efforts in an area more resistant to sea level rise than the majority of their current habitat.  Ensuring the safety of the chicks, so that they can successfully fledge, is the culmination of a great deal of hard work and cooperation.  We are honoured to steward this land and are excited for the future of this growing colony.” 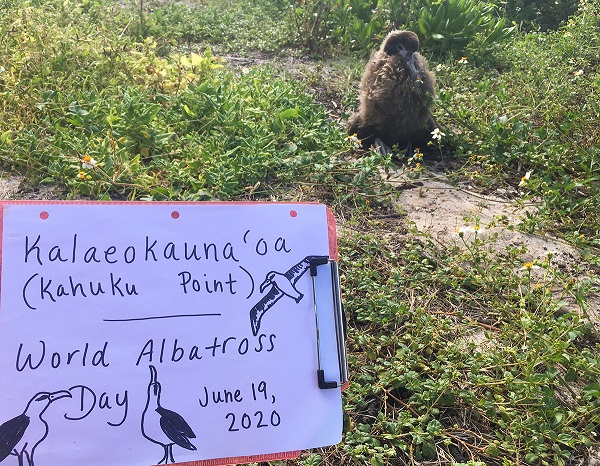 With COVID-19 restrictions in Hawaii halting both a planned World Albatross Day banner display with local school children at Kahuku Point this month and the making of a professional-looking banner, the Trust did the next best thing and took along a hand-illustrated sign on a clipboard to photograph with one of the 2019/20 season’s chicks.  This season with the improved protection from the Trust breeding numbers have increased to nine pairs, from which three chicks currently survive.