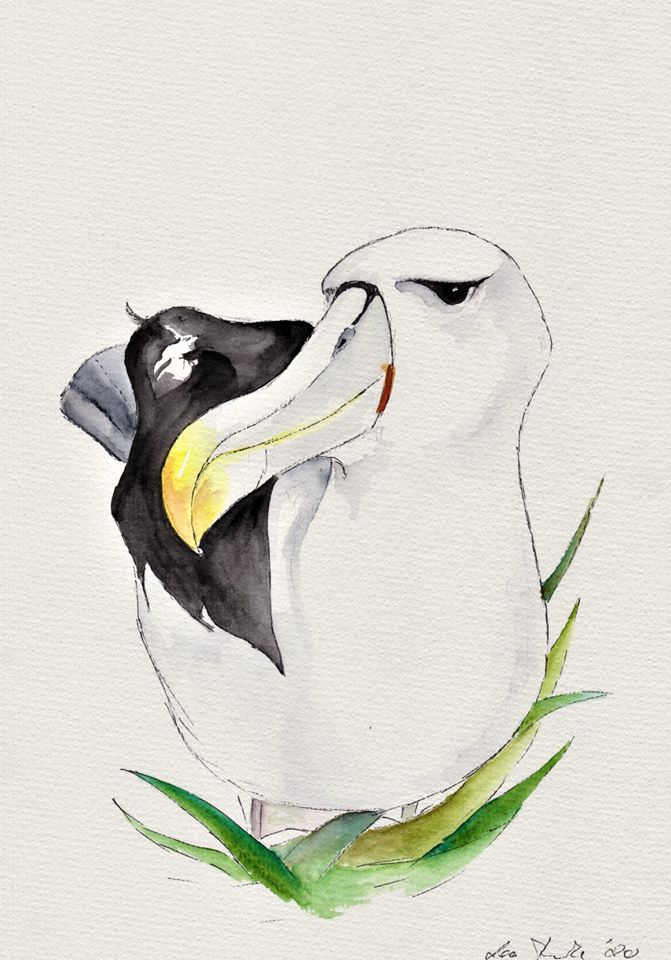 White-capped Albatross by ABUN artist Lea Finke, from a photograph by Graham Parker

Colin Miskelly (Museum of New Zealand Te Papa Tongarewa, Wellington, New Zealand) and colleagues have published in the journal Notornis on historical and recent records of birds of the Auckland Islands, including of six ACAP-listed species.

“The Auckland Islands are the largest island group in the New Zealand subantarctic region, and have the most diverse avifauna, including eight endemic taxa.  We present the first vcomprehensive review of the avifauna of the Auckland Islands, based on a database of 23,028 unique bird records made between 1807 and 2019.  At least 45 species breed (or bred) on the islands, with a further 77 species recorded as visiting the group as migrants, vagrants, or failed colonisers.  Information on the occurrence of each species on the different islands in the group is presented, along with population estimates, a summary of breeding chronology and other reproductive parameters, and diet where known.  The frequency at which 33 bird species were encountered during visits to the seven largest islands is compared graphically to facilitate comparison of each island’s bird fauna in relation to habitat differences and the history of introduced mammals.  Disappointment Island (284 ha) is the least modified island in the group.  However, it lacks forest, and so has a very restricted land bird fauna, lacking ten species that breed on other islands in the group.  Auckland Island (45,889 ha) is the only major island in the group where introduced mammals are still present.  As a result, it also has a depauperate bird fauna, with at least 11 species completely absent and a further seven species reported at lower frequencies than on the next largest islands (Adams and Enderby Islands).”

This publication forms part of a compilation of 19 papers appearing in a special issue of the journal Notornis of Birds New Zealand that covers many aspects of the avifauna of the Auckland Islands.  The special issue is also being made available as a 436-page book with the title Lost Gold: Ornithology of the subantarctic Auckland Islands.  Edited by Colin Miskelly and Craig Symes, it can be ordered for purchase (click here).  An interview with the two editors gives information about their work with the book.  Click here to access abstracts for all 19 papers.

With thanks to Colin Miskelly.