The Advisory Committee identified an urgent and continuing conservation crisis for albatrosses and petrels at its Eleventh Meeting (AC11) held in Brazil this May.  Thousands of albatrosses and petrels are continuing to die every year as a result of fisheries operations, notably by longline and trawl vessels.  Despite efforts that have been put into researching and recommending effective mitigation measures to address seabird bycatch in fisheries by ACAP and other bodies, in many instances these were not being implemented or were not being fully implemented.  A lack of compliance with measures adopted by those Regional Fisheries Management Organisations responsible for high-seas tuna fisheries (tuna RFMOs) was identified as a critical issue. 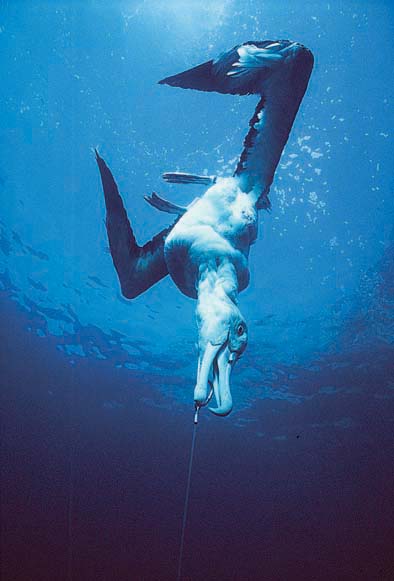 A globally Vulnerable Wandering Albatross Diomedea exulans has drowned after getting caught on a tuna longline hook, photograph by Graham Robertson

The Advisory Committee discussed ways of addressing this crisis, and agreed to seek views on how to enhance ACAP’s engagement with other role players to work constructively together to address the bycatch of albatrosses and petrels by fisheries.  In addition, the committee decided on ways to get its message across more broadly, through a revised communications strategy, engagement with fisheries certification schemes and ongoing refinement and dissemination of ACAP’s best-practice guidelines and advice.

The Eleventh Meeting of ACAP’s Advisory Committee (AC11) was held in Florianópolis, Brazil from 13 to 17 May with Nathan Walker (New Zealand) as Chair and Tatiana Neves (Brazil) as Vice-chair.  AC11 followed meetings of the AC’s Working Groups on Seabird Bycatch (SBWG9) and Population and Conservation Status (PaCSWG5) at the same venue.

AC11 was attended by eight of ACAP’s 13 Parties; observers were present from The Bahamas (for the first time), Canada, Namibia and the United States of America, as well as from Chinese Taipei, an APEC (Asia-Pacific Economic Cooperation forum) member economy – also for the first time.  NGOs in attendance were Humane Society International and Projeto Albatroz.  The meeting was opened with a welcome speech by Marilia Marques Guimarães Marini, Head of the Department of Conservation and Species Management, Ministry of the Environment, Brazil.  The 57-page report of the four-day meeting is now available on this website.  Official French and Spanish versions of the report are due to be posted by the end of July.  A second posting to ACAP Latest News will summarize other matters of interest discussed at the Eleventh Advisory Committee meeting.

Hope still for albatrosses?  A globally Endangered Antipodean Albatross Diomedea antipodensis identified as from the gibsoni subspecies flies towards the rainbow