“In world fisheries, incidental non target species mortality have turned in a permanent debate issue.  Although many studies have dealt with these interactions from a descriptive overview, there is little information based on fishing operations data.  One of the most important species that have awakened scientific concern are seabird, being southern Chile one of the areas with the highest levels in this kind of interactions. In order to improve our understanding on these relationships, we analyze records of fishing hauls of industrial trawlers off the coast of Chile between 39 and 57°S. The results showed that incidental seabird mortality appears to be affected mainly by the collisions with net monitoring systems (net-sonde cable), the duration of fishing hauls, the year period, and the fishing zones, these last related to the breeding period and areas of albatross colonies. We indirectly address a probable relationship between seabird mortality and fishing discards, and some hypothesis are proposed to explain the results. Finally, we demonstrated that longer fishing hauls are less efficient for fishing, beside to a high seabird mortality. Our findings suggest mitigation actions that would harmonize fishing activity with the ecosystem, in particular, for trawl fishing management and operations off far southern Chile.” 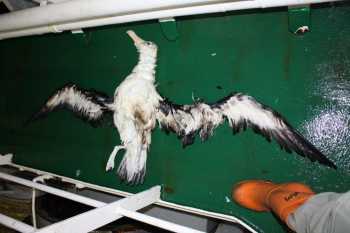 A Black-browed Albatross falls victim to a trawler, photograph by Graham Parker