“We investigated how foraging habits vary among three ecologically distinct wide-ranging seabirds. Using amino acid δ15N proxies for nutrient regime (δ15NPhe) and trophic position (Δδ15NGlu-Phe), we compared Newell’s shearwater (Puffinus newelli) and Laysan albatross (Phoebastria immutabilis) foraging habits over the past 50–100 years, respectively, to published records for the Hawaiian petrel (Pterodroma sandwichensis). Standard ellipses constructed from the isotope proxies show that inter-population and interspecific foraging segregation have persisted for several decades. We found no evidence of a shift in nutrient regime at the base of the food web for the three species. However, our data identify a trophic decline during the past century for Newell’s shearwater and Laysan albatross (probability ≥ 0.97), echoing a similar decline observed in the Hawaiian petrel. During this time, Newell’s shearwaters and Hawaiian petrels have experienced population declines and Laysan albatross has experienced range extension and apparent population stability. Counting other recent studies, a pattern of trophic decline over the past century has now been identified in eight species of pelagic seabirds that breed in the Hawaiian Islands. Because our study species forage broadly across the North Pacific Ocean and differ in morphological and behavioral traits and feeding methods, the identified trophic declines suggest a pervasive shift in food web architecture within the past century.” 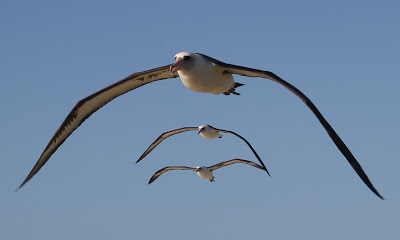