Segregation in space and time; the case of foraging Northern and Southern Giant Petrels

“Biological communities are shaped by competition between and within species. Competition is often reduced by inter‐ and intraspecific specialization on resources, such as differencet [sic] foraging areas or time, allowing similar species to coexist and potentially contributing to reproductive isolation. Here, we examine the simultaneous role of temporal and spatial foraging segregation within and between two sympatric sister species of seabirds, Northern Macronectes halli and Southern Macronectes giganteus Giant Petrels. These species show marked sexual size dimorphism and allochrony (with earlier breeding by Northern Giant Petrels) but this is the first study to test for differences in foraging behaviours and areas across the entire breeding season both between the two species and between the sexes. We tracked males and females of both species in all breeding stages at Bird Island, South Georgia, to test how foraging distribution, behaviour and habitat use vary between and within species in biological time (incubation, brood‐guard or post‐brood stages) and in absolute time (calendar date). Within each breeding stage, both species took trips of comparable duration to similar areas, but due to breeding allochrony they segregated temporally. Northern Giant Petrels had a somewhat smaller foraging range than Southern Giant Petrels, reflecting their greater exploitation of local carrion and probably contributing to their recent higher population growth. Within species, segregation was spatial, with females generally taking longer, more pelagic trips than males, although both sexes of both species showed unexpectedly plastic foraging behaviour. There was little evidence of interspecific differences in habitat use. Thus, in giant petrels, temporal segregation reduces interspecific competition and sexual segregation reduces intraspecific competition. These results demonstrate how both specialization and dynamic changes in foraging strategies at different scales underpin resource division within a community.” 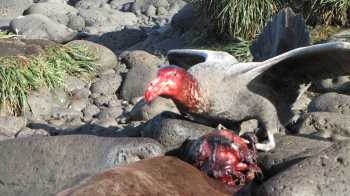