Stefan Oppel (Centre for Conservation Science, Royal Society for the Protection of Birds, United Kingdom) and colleagues have published in the journal Marine Policy on an analysis of tracking data for 52 Atlantic seabird species, including 10 ACAP-listed albatrosses and petrels.

“Knowing the spatial scales at which effective management can be implemented is fundamental for conservation planning. This is especially important for mobile species, which can be exposed to threats across large areas, but the space use requirements of different species can vary to an extent that might render some management approaches inefficient. Here the space use patterns of seabirds were examined to provide guidance on whether conservation management approaches should be tailored for taxonomic groups with different movement characteristics. Seabird tracking data were synthesised from 5419 adult breeding individuals of 52 species in ten families that were collected in the Atlantic Ocean basin between 1998 and 2017. Two key aspects of spatial distribution were quantified, namely how far seabirds ranged from their colony, and to what extent individuals from the same colony used the same areas at sea. There was evidence for substantial differences in patterns of space-use among the ten studied seabird families, indicating that several alternative conservation management approaches are needed. Several species exhibited large foraging ranges and little aggregation at sea, indicating that area-based conservation solutions would have to be extremely large to adequately protect such species. The results highlight that short-ranging and aggregating species such as cormorants, auks, some penguins, and gulls would benefit from conservation approaches at relatively small spatial scales during their breeding season. However, improved regulation of fisheries, bycatch, pollution and other threats over large spatial scales will be needed for wide-ranging and dispersed species such as albatrosses, petrels, storm petrels and frigatebirds.” 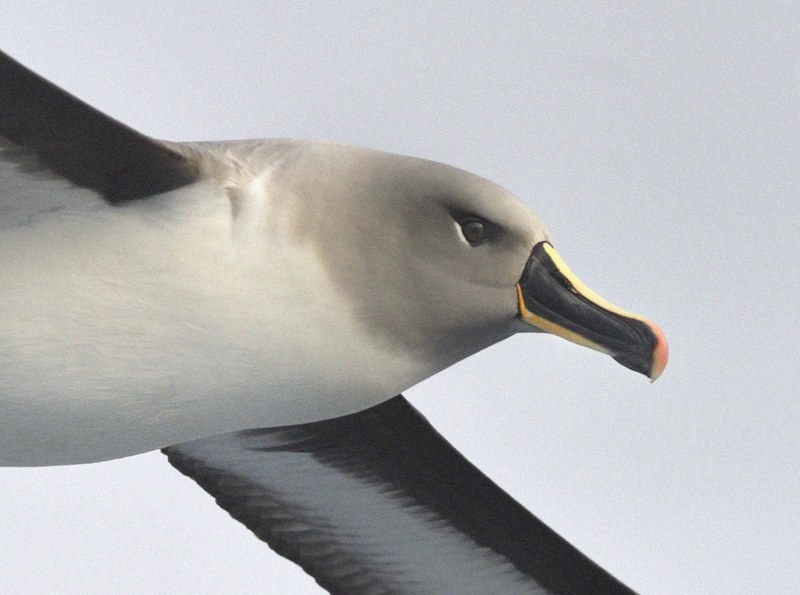 Grey-headed Albatross at sea: one of the 10 ACAP-listed species in the study; photograph by Kirk Zufelt