On the Hawaiian island of Kauai the Save Our Shearwaters (SOS) team of the Kauai Humane Society has been supplementary feeding globally Near Threatened Laysan Albatross Phoebastria immutabilis chicks that are known or are thought to have lost a parent by death or injury for the last four years.  To date five single-parent chicks have received extra feeds, leading to four of them fledging.  Their individual stories follow.

At the beginning of April 2015 Cathy Granholm, albatross monitor for a golf course in the Princeville community on Kauai’s north shore, was made aware that one of the adults (band numbers K164/1517-86432) of a Laysan Albatross breeding pair had been “taken” (killed) as bycatch in a long-line fishery approximately six weeks previously. Following supplementary feeding the chick fledged in good condition.  This coming 2018/2019 breeding season will be the first that this bird might return to Kauai as a three-year-old.

In 2015 a breeding Laysan Albatross appeared to have collided with a fence that had been erected while the bird was at sea and its resulting injuries required treatment at the SOS facility. The parent was in care for 22 days and while the adult was recovering, supplemental feeds were given to its chick.  A reunion video showed that the adult did not fly out immediately on release but went over to the chick and spent some time with it before heading out to sea. Unfortunately a check on the chick a week later found it dead.  There was too much decomposition to determine the cause of death but it was found right next to an area of the fence in a spot where dogs on the other side could potentially have got through.

In the third case of supplementary feeding a breeding adult on a private property on the north shore was injured in early April 2016 during a tagging study and it later died while in rehabilitative care.  The chick successfully fledged between 8-12 July 2016.

The fourth case is of a chick banded H694 and known as Kiamanu that fledged over 13/14 July 2018.  Because the nest was under 24-hour watch by an “albicam” it was determined that the chick's male parent had not returned in quite some time.  On assessment the chick was severely underweight and behind in its growth.  It was fed every two to three days throughout the remainder of the chick-rearing period although closer to fledging the feeds were spaced farther apart. The camera operators were able to let the feeder Christa McLeod know when the surviving female parent was back and feeding the chick so she could time the feeds to not interfere with the remaining parent and risk regurgitation by a freshly fed chick

A second 2018 chick was on the Princeville property of Cathy Granholm who realized that the male was not returning prior to hatching. The female had incubated the egg for 46 days and then brooded the hatched chick for a further 10 days before finally succumbing to the needs of her body and left to feed herself at sea for the first time in 56 days.  Marilou Knight was the feeder for this chick which fledged on 2 July 2018, the fifth to do so since supplementary feeding of Laysan Albatross chicks by SOS commenced in 2015.

The birds were fed a fish slurry composed of several species of fish with additional oil and supplemental vitamins. Squid forms part of the slurry as well but it is not a major component.

Save Our Shearwater’s wildlife rehabilitation activities are conducted under permit and with the Hawaiian State’s and landowners’ permission. 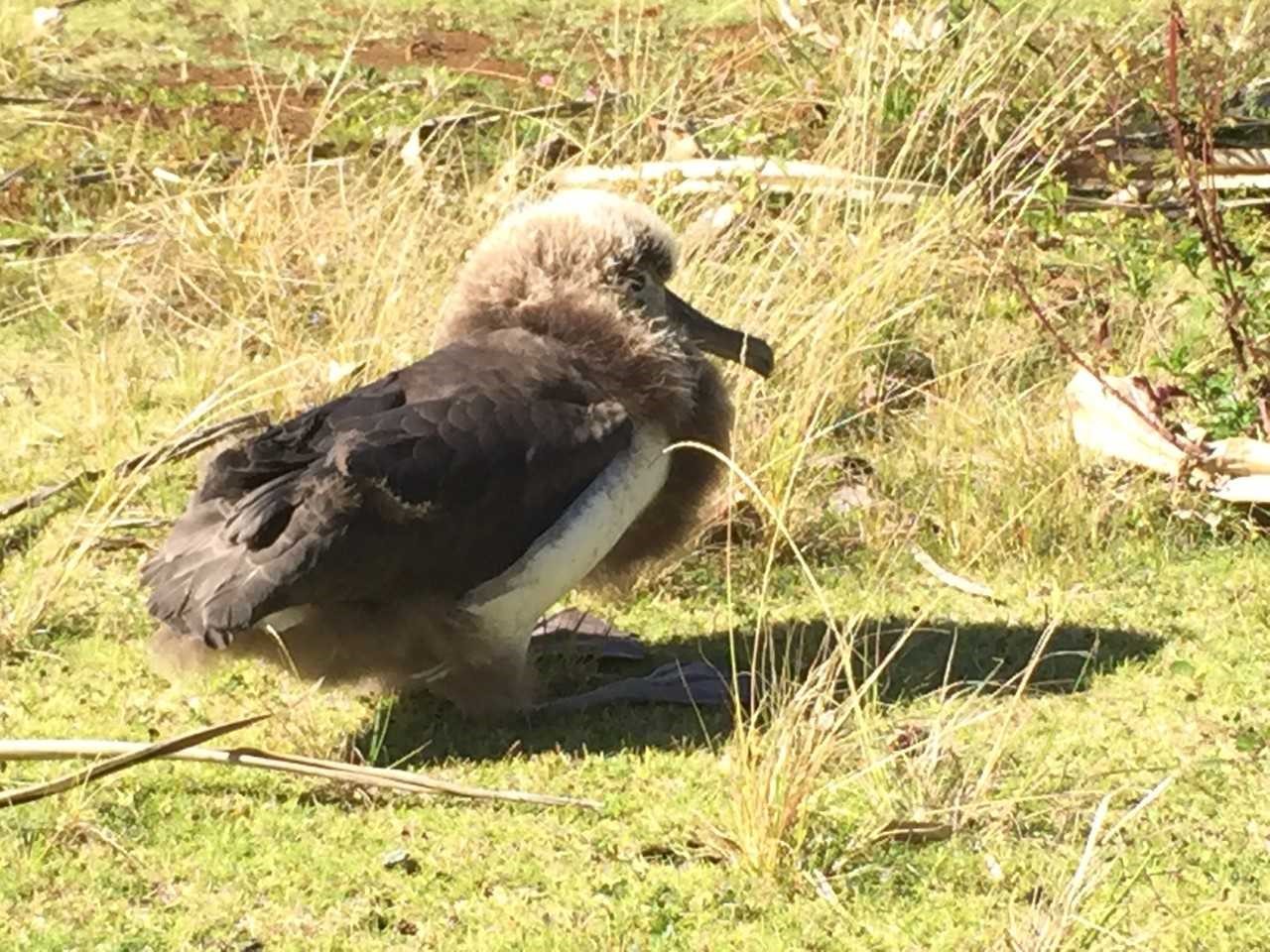 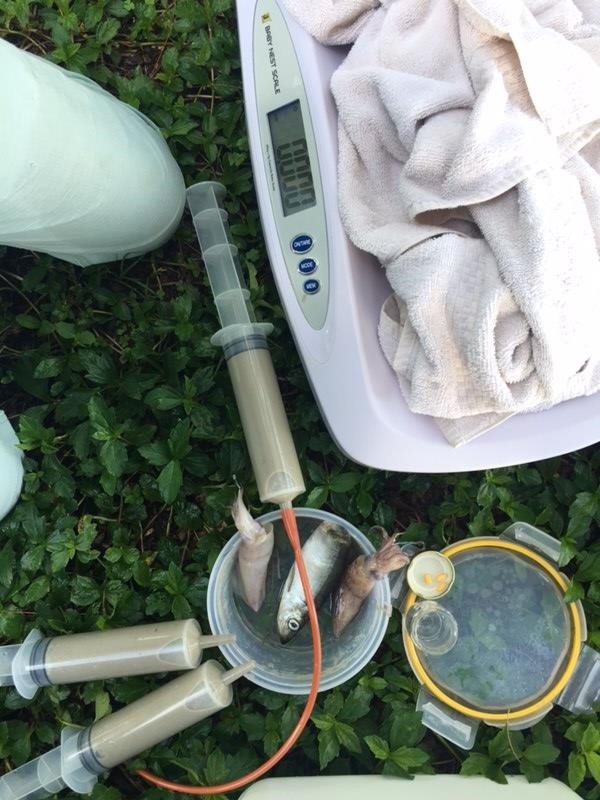 A meal prepared for Kiamanu in 2018, photograph by Christa McLeod 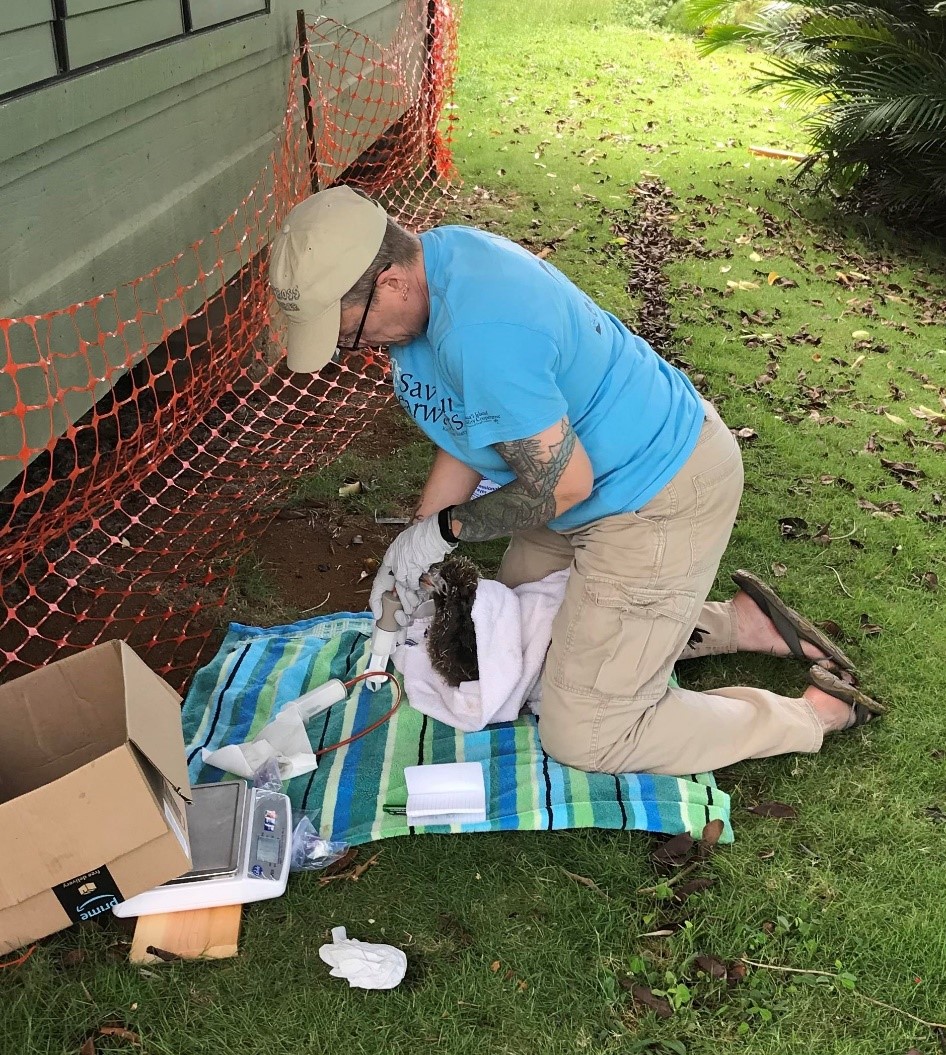 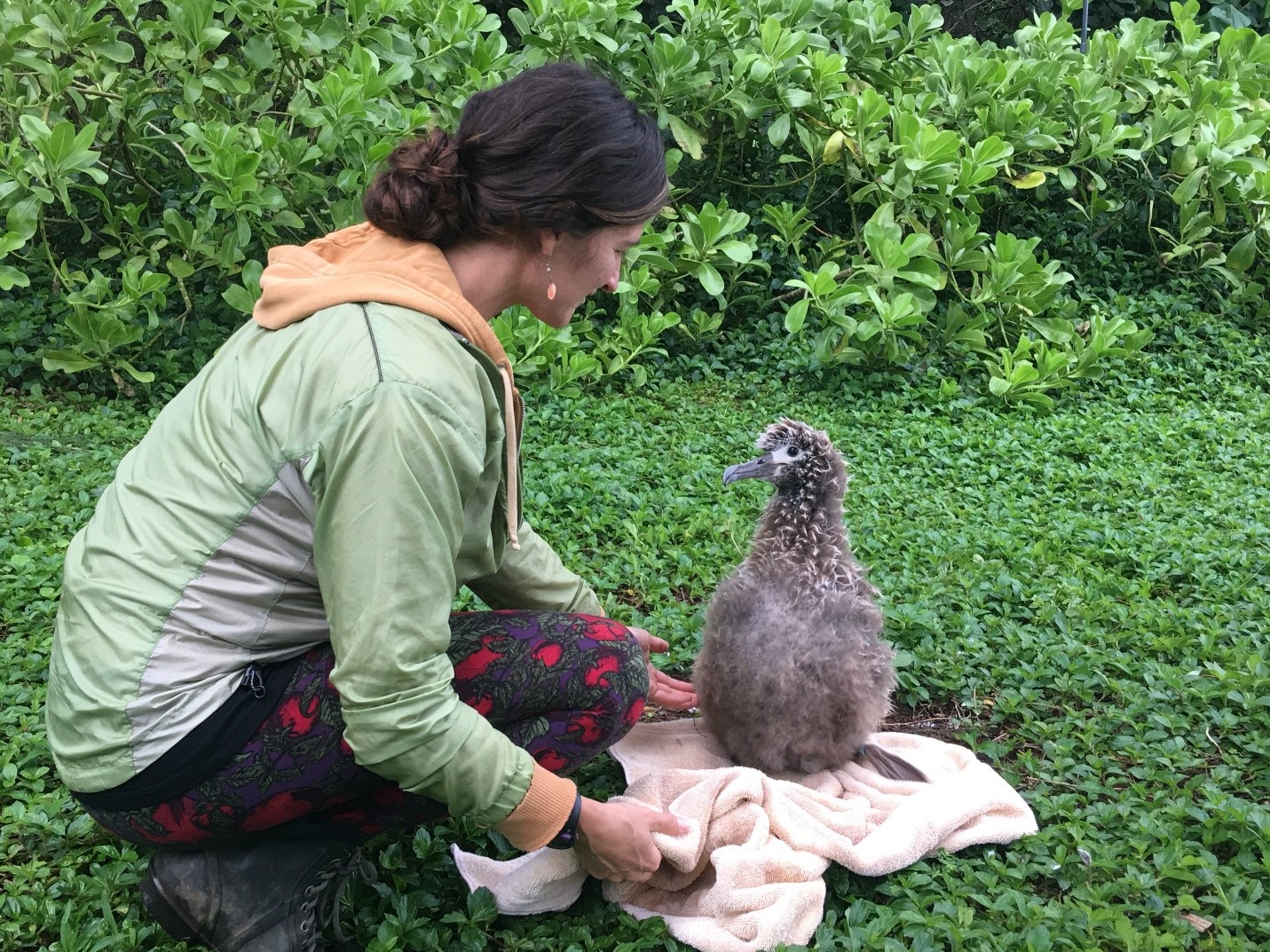 Christa McLeod with Kiamanu in 2018, photograph by Hob Osterlund