Kalinka Rexer-Huber (Parker Conservation, Dunedin, New Zealand) and colleagues have submitted a draft report to the Conservation Services Programme of New Zealand’s Department of Conservation on the demographics of the globally Near Threatened White-capped Albatross Thalassarche steadi on Disappointment Island, part of the Auckland Islands.

“The white-capped albatross Thalassarche cauta steadi is a biennially-breeding seabird endemic to New Zealand. The species ranks highly in assessments of the risk of commercial fisheries to New Zealand seabird populations, but there is some uncertainty around key life-history parameters. The overarching objective of this study is to obtain robust estimates of white-capped albatross demographic parameters.

To estimate key parameters, including adult survival, recruitment and population trends, we established a marked population of breeding birds at Disappointment Island, Auckland Islands (the largest population of white-capped albatross). We report on field work in 2018 to resight banded albatrosses and increase the number of banded birds in the study area. Three years of recaptures are not sufficient for robust demographic rate estimates, but enable some exploratory analyses. To assess how many further resighting visits might be required for demographic rate estimates to be suitably precise, we generate preliminary demographic rates from resightings to date (2015–2018) and use these to simulate realistic ‘dummy’ resighting data that build on the real data to date.

A total of 521 breeding white-capped albatrosses have been banded in four annual visits to Disappointment Island 2015–2018. A third of white-capped albatross banded in previous years were resighted in 2018, compared to 22% and 23% in the two previous visits 2016 and 2017. These resighting rates are encouraging, given the short duration of visits (insufficient time for incubating birds to be relieved by mates), and given that the primary focus of the work was on banding, not resighting.

Simulation modelling indicated that the accuracy and precision of all estimated parameters incrementally improves with further consecutive resighting years. Using the example of adult survival, we show that the rate of decrease in the variance of survival estimates was greatest with 1–3 further years of consecutive resighting effort from present.” 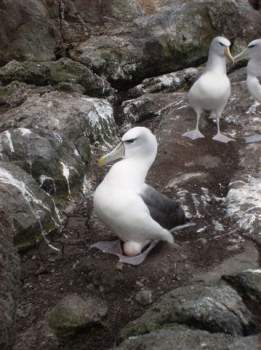