The ACAP-listed Grey-headed Albatross Thalassarche chrysostoma has been listed as globally Endangered because of a decline since the 1970s of its largest breeding population, occurring at South Georgia (Islas Georgias del Sur)*.  A recent resurvey of a subset of colonies at the island indicates a decrease in numbers over the last decade of 5% a year.

Recent analyses of long-term records of banded birds found that annual survival rates of juveniles were lower than expected and highly variable.

Records from observers on fishing vessels have shown that immature birds are killed by pelagic longline fisheries in areas that are not used regularly by non-breeding adults.  In addition, circumstantial evidence suggests that because of the population decline there may have been a density-dependent increase in predation by giant petrels Macronectes spp. of juvenile Grey-headed Albatrosses, both as they fledge and in the few days immediately thereafter when they often rest on the sea close to the island.

In May 2018, 16 satellite tags (PTTs) were attached to Grey-headed Albatross chicks prior to their departure from Bird Island to map foraging areas of juveniles in order to determine the overlap with fisheries and to obtain data on juvenile survival.  The birds are being tracked in near real-time using the Argos system.

Click here to follow the birds’ at sea movements and distances travelled, with updates expected several times a day. 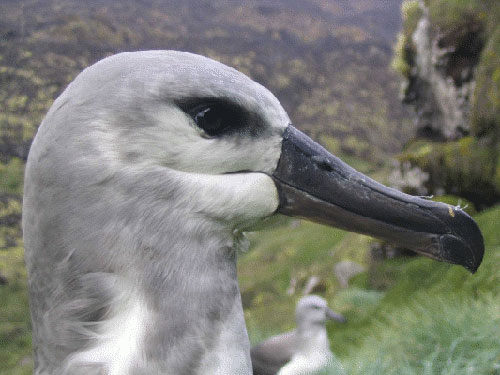