French National Plans of Action for biodiversity are operational documents aimed at the conservation of threatened species within France and its territories. Since 2011 the Amsterdam Albatross Diomedea amsterdamensis, an ACAP-listed species categorized by IUCN as Critically Endangered, has benefited from a National Plan of Action (NPoA). An updated version is now ready for adoption.

The Amsterdam Albatross is endemic to France’s Amsterdam Island where it breeds. This uninhabited island, located in the southern Indian Ocean, is part of the National Nature Reserve of the French Southern and Antarctic Territories (TAAF).  As a Party to the Agreement on the Conservation of Albatrosses and Petrels (ACAP), France is committed to achieve and maintain a favourable conservation status for albatrosses and petrels within its territories, including the Amsterdam Albatross. 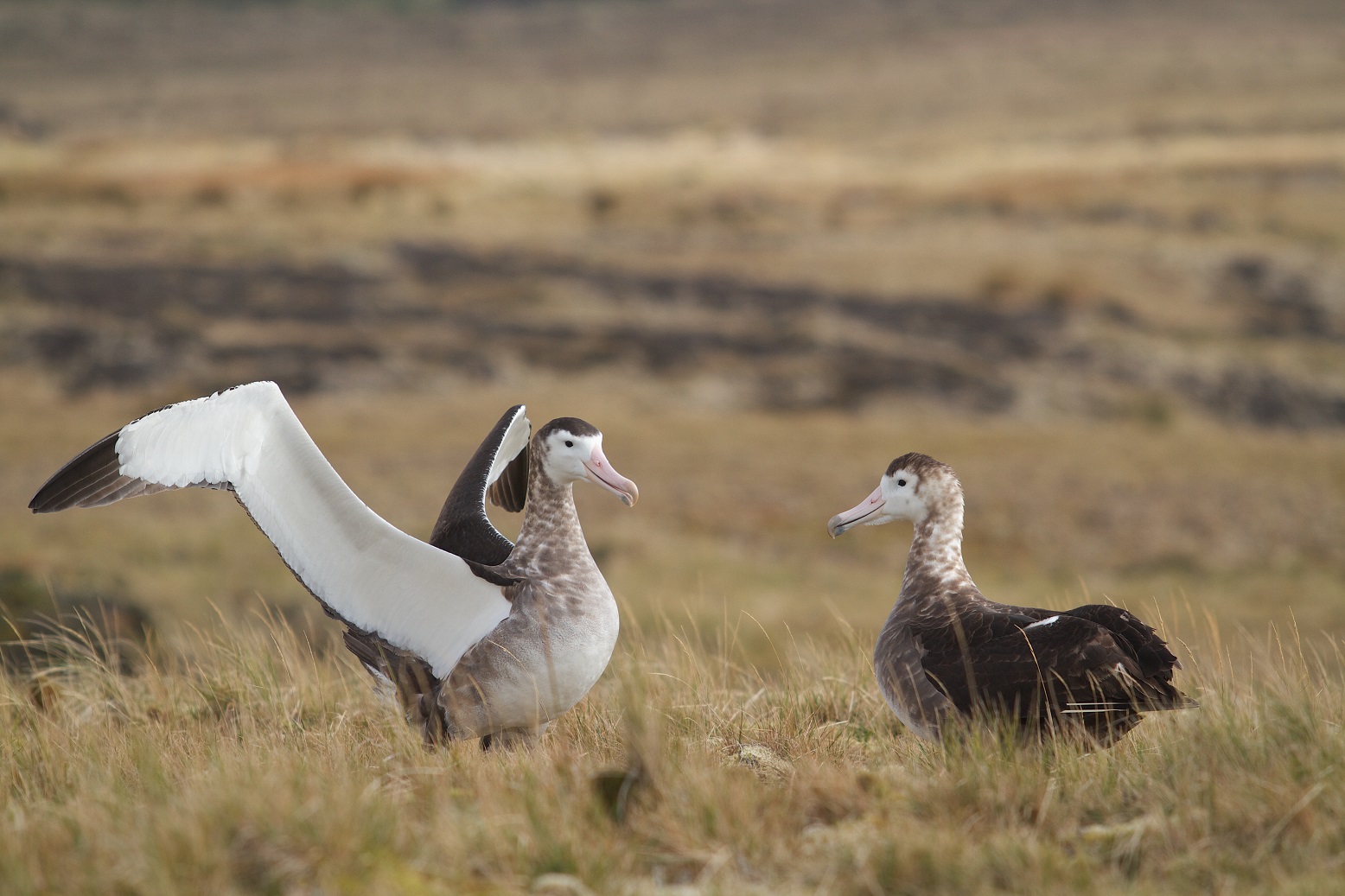 The species’ population has been steadily increasing in size with an annual growth rate of 4.1% over the survey period from 1983 to 2017. Based on unpublished information, the population is currently estimated at around 216 individuals, of which about half are mature individuals. However, several threats to the Amsterdam Albatross still exist.

Firstly, there is a large overlap in the at-sea distribution of adult Amsterdam Albatrosses and longline fisheries in the southern Indian Ocean. Although no incidental capture of Amsterdam Albatrosses in such fisheries has been reported to date, the threat is thought to have a significant impact outside France’s Exclusive Economic Zones (EEZs) around its southern islands. It is noteworthy that longline fisheries are not required to report bird captures outside the French EEZs.

Secondly, chicks of the globally Endangered Indian Yellow-nosed Albatross Thalassarche carteri breeding on Amsterdam Island are affected by the bacterium Pasteurella multocida, leading to a low breeding success (click here). With infected colonies of the globally Endangered Indian Yellow-nosed Albatrosses being close to the nests of Amsterdam Albatrosses there is a risk of an epizootic outbreak, which would be catastrophic for the population of the Amsterdam Albatross.

Thirdly, feral cats Felis catus, Norway or Brown Rats Rattus norvegicus and House Mice Mus musculus are introduced predators still present on the island. So far, no case of predation on Amsterdam Albatrosses has been reported by any of these species. However, predation of eggs and chicks by cats and rats is widely documented for other seabirds (but click here for Amsterdam’s rats). On Gough Island in the South Atlantic, with a broadly similar habitat to Amsterdam Island, House Mice have been found responsible for deadly attacks on albatross and other seabird chicks, as has been regularly reported in ACAP Latest News (click here).  In addition, rats are also supposed to be a major reservoir of Pasteurella multocida and thus could be expected to have a role in the possible outbreak of an epizootic.

Finally, the island’s habitat has suffered significant damage due to the presence of domestic cattle introduced in 1871, making it unsuitable for albatrosses to breed on large parts of the island. Complete removal of the herd in 2010 has removed this threat, but climate change makes habitat evolution uncertain, with the possible spread of introduced plant species.

The first NPoA, initially aimed to cover the period 2011 to 2015, has been extended until the end of 2017, in which year it was assessed (click here for the French assessment text).

Due to the species’ unfavorable conservation status and the continuing threats it faces, a second NPoA will be adopted to cover the 10-year period 2018 to 2027. The prepared text was discussed on 19 March this year in Paris with the National Nature Reserve, main scientific partners and the Ministry of the Environment. Its 17 proposed actions have been approved and the final document will be adopted and made available before the end of the year.