Amanda Kuepfer, a scientific seabird observer based in the Falkland Islands/Islas Malvinas*, has reported to ACAP Latest News of her observations of three ACAP-listed seabirds at sea in the South Atlantic that had red paint on their plumage.

On 12 April 2017, while conducting seabird observations aboard a trawler targeting finfish in the South Atlantic at 60.52S, 50.69E, Amanda saw two Black-browed Albatrosses Thalassarche melanophris and one Southern Giant Petrel Macronectes giganteus that had been daubed with red paint. The three painted birds appeared to be in good condition and were actively feeding on discards consisting primarily of processing waste behind the trawler. 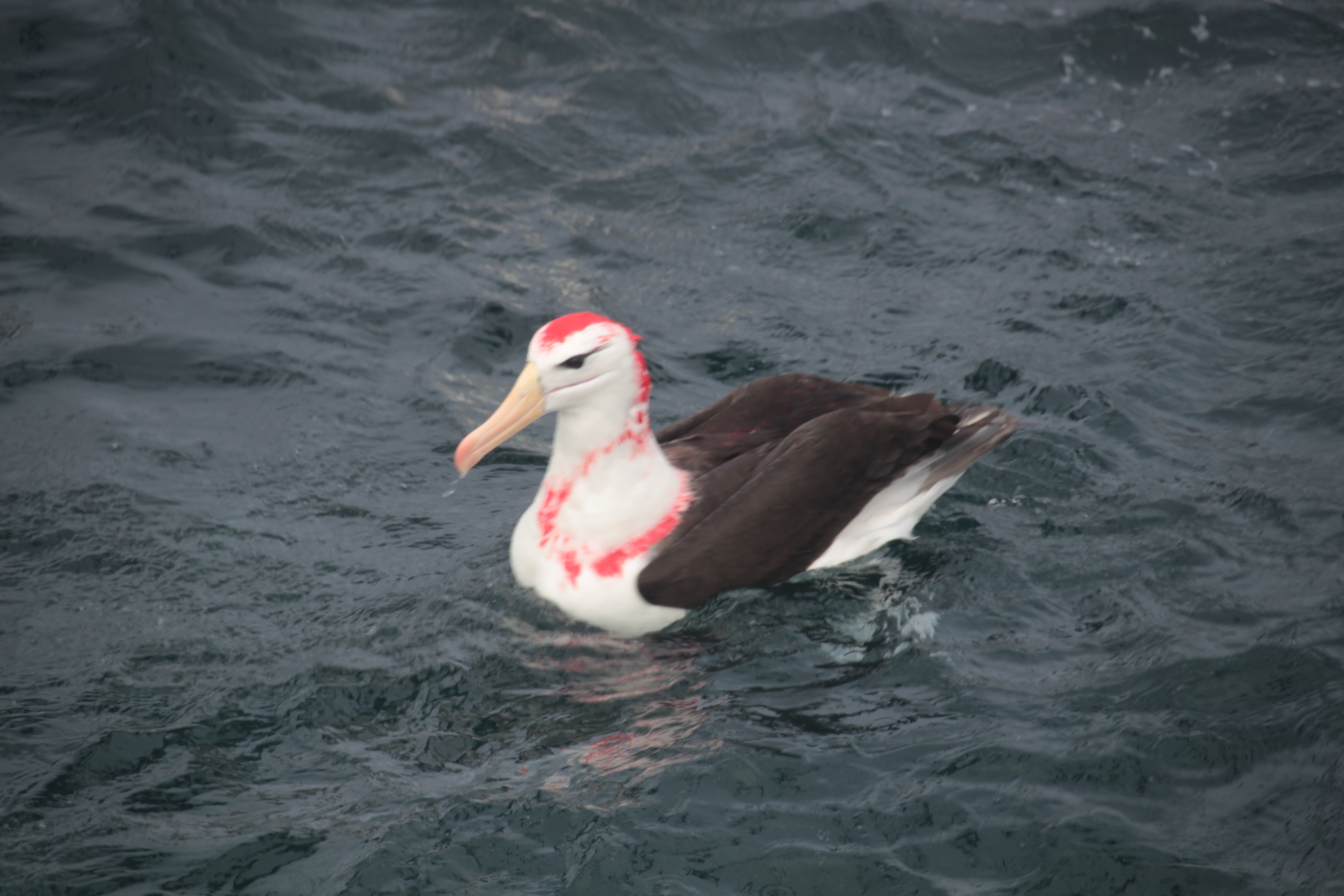 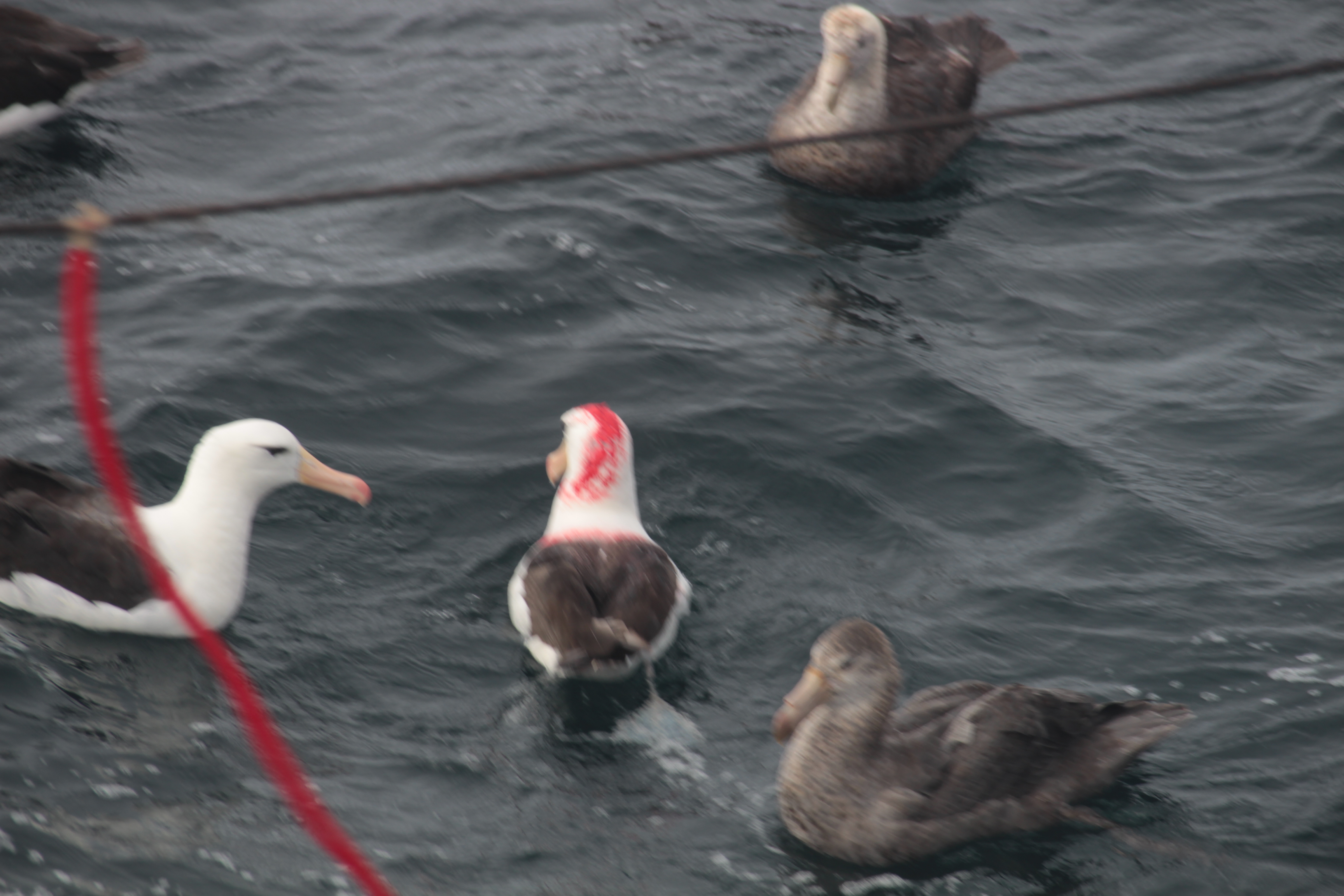 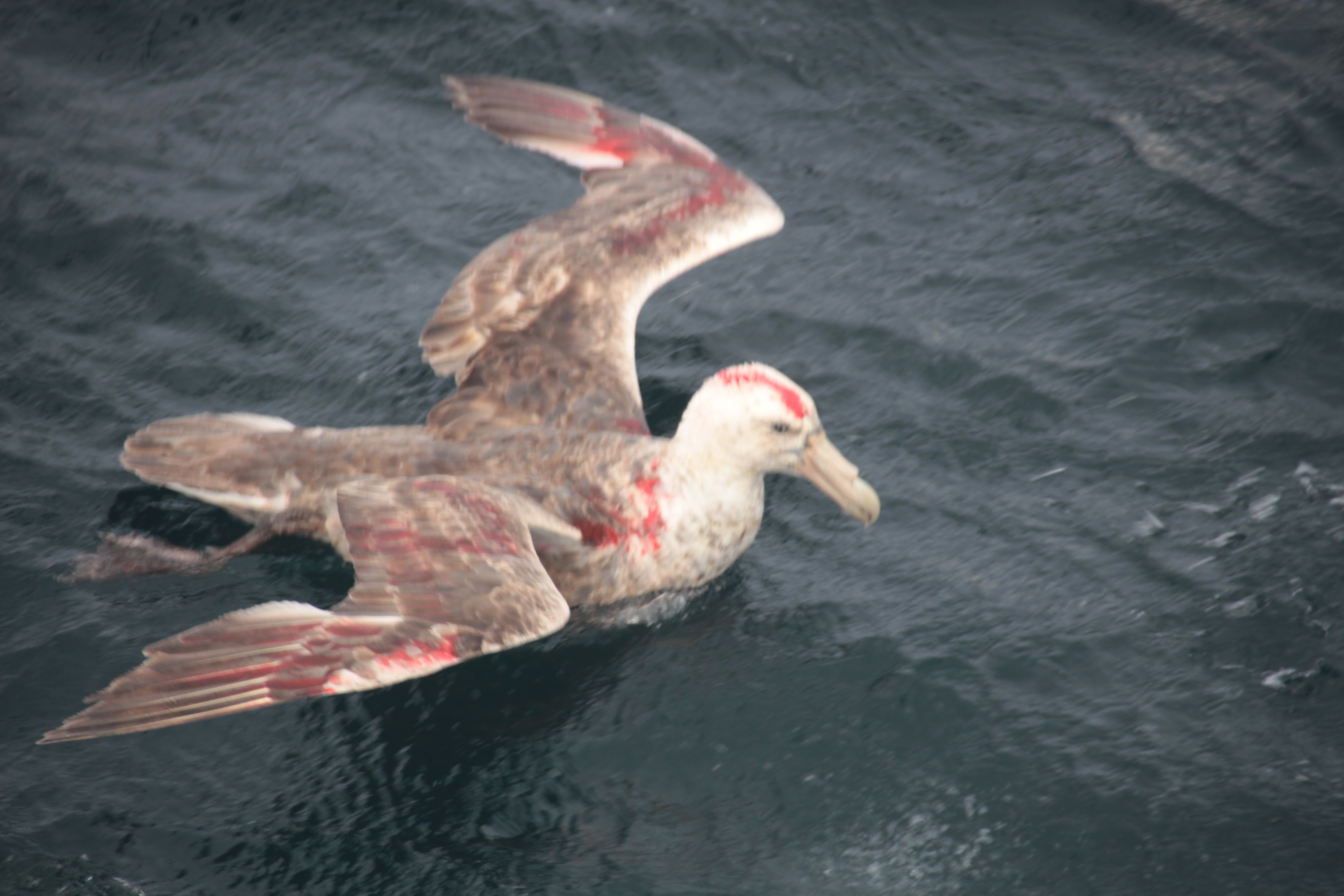 The paint, that looked to be of an identical type and shade, seemed to have been rather randomly applied, covering parts of the head, throat, breast, nape, back and upper wings of the birds. However, the similar head markings of the two birds photographed does suggest a deliberate act. The birds may have been splattered from a brush, or daubed by a long-handled paint roller while in the water close to a vessel at sea. Alternatively, the birds could have come aboard a ship somehow and the paint then applied before their release.

At the request of ACAP Latest News Yan Ropert-Coudert, Secretary of the SCAR Expert Group on Birds and Marine Mammals (EGBAMM), has commented on Amanda’s observations and photographs. He writes “probably not part of a study. Most of the painting marks on [study] birds are generally temporary (with marks being washed by seawater quickly) and would thus not be extremely useful if the purpose was to examine distribution”.

Incubating Shy Albatrosses T. cauta have been marked with a small daub of paint in one study in recent times (click here) but it seems permanent paint (and usually not red that resembles blood and so could attract predators) is little used nowadays as a marking tool when studying seabirds.

Future observations of painted seabirds, including albatrosses and petrels, in the Southern Ocean may be reported to EGBAMM. It would be intriguing, if any painted birds get caught in the future, to ascertain whether the applied paint is of a type used to paint vessels. The ultimate aim would be to discover who has applied the paint.

With thanks to Amanda Kuepfer and Yan Ropert-Coudert.