Will House Mice continue their attacks on Midway’s Laysan Albatrosses for a third breeding season – and what can be done about it?

Mice are the sole rodent and non-native mammal present on the atoll since Black Rats Rattus rattus were eradicated in 1996. The new habit, which has resulted in fatalities, was first noticed in just a few areas in December 2015, being recorded again the next breeding season over a much larger area. “When 2016 rolled around we were on the lookout for mice predation. And sure enough we started seeing the same attacks on albatrosses - only this time it was a much greater number of birds and it was much more widespread. It was across the entire island” (click here and here for gruesome photographs and night-time videos of mice attacking Laysan Albatrosses). 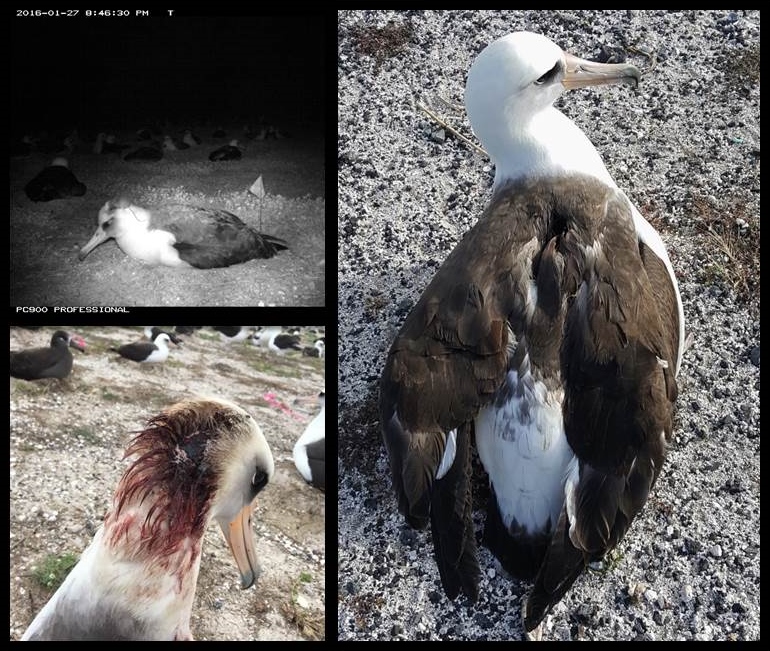 Mouse attacks on Midway albatrosses during the 2015/16 breeding season, photographs by US Fish & Wildlife Service and Robert Taylor

Midway is the third island where House Mice are known to kill breeding albatrosses, either (or both) chicks and adults on their nests, following Gough and Marion in the southern hemisphere; both islands where plans are afoot to eradicate then in the next few years (click here to access a selection of news items for these two islands)

With the 2017/18 breeding season about to start the U. S. Fish and Wildlife Service “is committed to protecting and conserving the seabird colony on Midway Atoll and finding solutions to this growing crisis.” The service is working with partners to develop a long-term plan address the increasing threat of these invasive predators to seabirds on Midway Atoll.