Cristián Suazo (Department of Animal Ecology and Systematics, Justus Liebig University Giessen, Germany) and colleagues have published in the journal Revista de Biología Marina y Oceanografía on the at-sea distribution of the Critically Endangered Waved Albatross Phoebastria irrorata off the coast of Chile.

“Long-lived seabird species such as albatrosses and petrels, which are widely distributed at sea and have small populations are threatened globally by bycatch in fisheries. Among these, the waved albatross Phoebastria irrorata is scarcely detected in the Exclusive Economic Zones (EEZs) of countries beyond its traditional distribution throughout the Southeast Pacific In this article, in situ distributional records on the waved albatross obtained from non-systematic (pelagic birdwatching) and systematic (fishery monitoring) records were compiled. Occurrence of sightings was carried out in relation to recording traits as presence/absence of breeding period and El Niño proxies such as the Southern Oscillation Index (SOI), among others. A total of 13 sightings of waved albatrosses was described which 76.9% of sightings were related to non-breeding period (December to April). Records indicated waved albatrosses reached 4,391 km south of the Galapagos Islands (38°S) and 920 km west of the South American coast (79°W). The waved albatross was associated with industrial pelagic longline and demersal trawl fisheries, and although there were no records of bycatch, the observation of individuals feeding on discards and offal suggests a potential risk of mortality for this species. 53.8% of sightings were during positive readings of the Southern Oscillation Index (SOI), representing colder conditions than neutral El Niño Southern Oscillation (ENSO).” 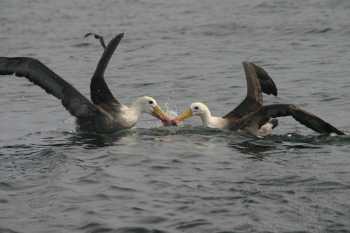 With thanks to Cristián Suazo.