Benoit Gineste (UMR ENTROPIE, Saint-Denis Messag, France) and colleagues  have published in the Journal of Ornithology on the effects of light pollution on Tropical Shearwaters Puffinus bailloni on Reunion.

“Seabirds are exposed to numerous threats at sea and on land, and they are among the most endangered birds worldwide.  Procellariids are attracted by artificial light, and this causes massive fallout at various places of the world.  In Reunion Island, Tropical Shearwaters Puffinus bailloni are heavily impacted by light pollution.  To assess the population trends of this species, we conducted two large-scale acoustic surveys across the island (in 1996/1997 and in 2013/2015) and analysed the numbers of birds attracted by lights and rescued by the local wildlife rescue center between 1996 and 2015.  We detected 220 colonies in 2013/2015, including 124 colonies previously surveyed in 1996/97 and 96 newly discovered colonies.  The average vocal activity recorded at colonies was similar during the two surveys suggesting no marked change in population size.  Some 13,200 Tropical Shearwaters were found grounded since 1996 due to light attraction, of which 88 % were successfully released.  The number of reported grounded birds increased 19-fold between 1996 and 2015.  This increase was due to a combination of factors that are difficult to disentangle: (1) increasing public awareness; (2) increasing light pollution; and (3) the absence of population collapse.  Indeed, both acoustic surveys and the number of rescued birds indicate that the Tropical Shearwater population of Reunion Island did not decline between 1996/1997 and 2013/2015.  We suggest that the rescue campaigns conducted annually strongly contributed to this stability.  Thus, we recommend maintaining the rescue operations, but also to reduce light pollution.” 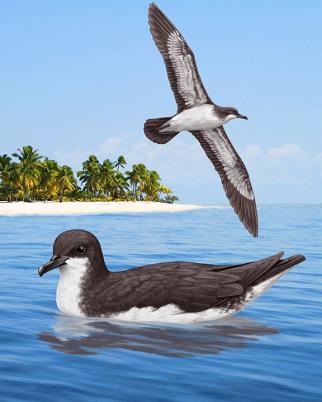