The Operations Advisor for the Gough Island Restoration Programme, New Zealander Keith Springer, returned from a visit to Gough Island earlier this month when ACAP Latest News met up with him in a Cape Town Korean restaurant.

Keith has reported on his three-week visit to the island in a blog hosted by the UK’s Royal Society for Bird Preservation. The RSPB is taking the lead in plans to eradicate the island’s “killer” House Mice Mus musculus  which are taking the ACAP-listed and Critically Endangered Tristan Albatross Diomedea dabbenena to the edge of extinction.  The mice result in the death of many downy chicks every winter, leading to an unsustainably low breeding success.  A number of other seabird species breeding on the island is known or thought to be seriously affected by mice. 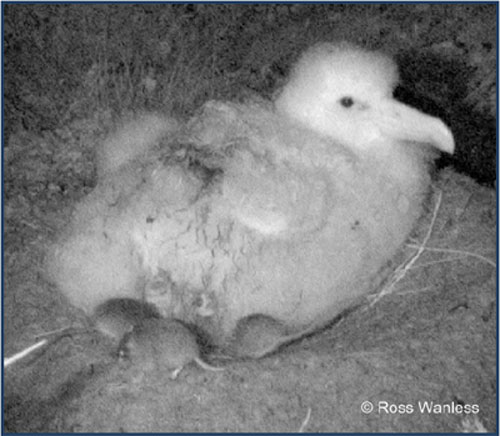 Mice attack a Tristan Albatross chick on Gough at night - it later died from its wounds, photograph by Ross Wanless

In his third and last contribution Keith has good news: “Nothing that I saw on Gough Island would be a show-stopper for the mouse eradication project. There is no doubt in my mind that there will be challenges along the way but planning will help overcome these ”.

Keith considers the challenges of Gough’s isolation in mid-Atlantic, the restricted capacity of the South African weather station and most importantly the island’s often poor and changeable weather can all be overcome and an aerial drop of poison bait by helicopter has a good chance of succeeding.  He ends “all in all it has been a very informative trip.  Once fundraising has got to the point where the project is given the green light to proceed, then planning can begin in earnest.”  Welcome the day! 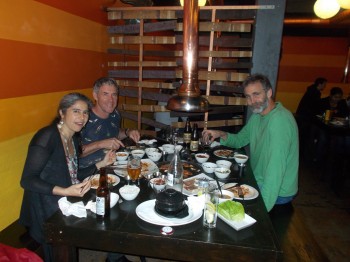