Do they get dizzy? Tags show spinning Wandering Albatrosses attract squid at night

News from Rory Wilson of Swansea University in Wales at the British Science Festival is that ACAP-listed Wandering Albatrosses Diomedea exulans carrying recording tags swim in circles on the sea surface at night to attract squid (click here).

"The most surprising thing that we have discovered was from wandering albatrosses.  The general consensus used to be that these birds would fly huge distances to find and eat dead squid, since such large birds would be unable to catch squid alive.  We saw that the wandering albatross would swim at night in crazy circles for periods from 40 seconds up to seven hours, continuously, and then they'd suddenly be eating."

"What we think they're doing is, when it is very dark in parts of the ocean, they're swimming to agitate bioluminescent plankton, causing a bright glow.  The squid, attracted like a moth to a flame, will then swim to the light and get eaten." 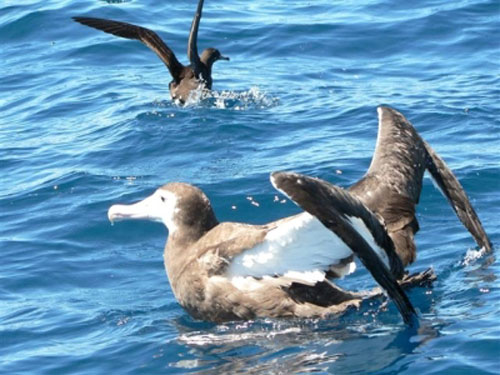 A young Wandering Albatross on the sea surface