The Friends of Midway Atoll NWR have recently reported on the most recent counts of breeding albatrosses on the atoll in the North-Western Hawaiian Islands as follows.

“Hatch year 2015 far surpassed any previous documented year for nesting Laysan Albatross Phoebastria immutabilis on Midway Atoll National Wildlife Refuge with 666 044 pairs recorded.  The 2015 year count for Laysan Albatross represents a 52% increase over the average number for the period from hatch years 2010 to 2014.  Black-footed Albatross P. nigripes nesting pairs came in at 28 610 for the atoll, also a new record, up just over 18% from the 2010-2014 average.  The previous high year for Laysan Albatross was 2006 with 487 527 - whereas for Black-footed Albatross, the previous high was 28 581 in 2011.

The reference “hatch year 2015” defines the albatross breeding season from the time eggs were laid in November 2014, hatched in January 2015, and expected to leave Midway Atoll NWR by July 2015.” 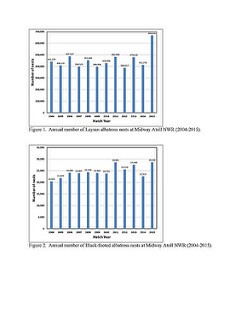 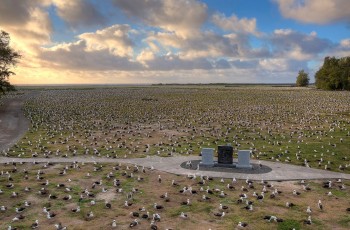 For graphs, photos, and video of the count effort and albatross mating and nesting activity on Midway Atoll click here.