Impact of wind on foraging of incubating Wandering Albatrosses

Tina Cornioley (Institute of Evolutionary Biology and Environmental Studies, University of Zurich, Switzerland) and colleagues have a paper in press with the Journal of Animal Ecology which investigates the relationships between body mass and wind patterns in incubating Wandering Albatrosses Diomedea exulans.

“1. Wind is an important climatic factor for flying animals as by affecting their locomotion, it can deeply impact their life-history characteristics.

2. In the context of globally changing wind patterns, we investigated the mechanisms underlying recently reported increase in body mass of a population of wandering albatrosses (Diomedea exulans) with increasing wind speed over time.

3. We built a foraging model detailing the effects of wind on movement statistics and ultimately on mass gained by the forager and mass lost by the incubating partner.  We then simulated the body mass of incubating pairs under varying wind scenarios.  We tracked the frequency at which critical mass leading to nest abandonment was reached to assess incubation success.

4. We found that wandering albatrosses behave as time-minimizers during incubation as mass gain was independent of any movement statistics but decreased with increasing mass at departure.  Individuals forage until their energy requirements, which are determined by their body conditions, are fulfilled.  This can come at the cost of their partner’s condition as mass loss of the incubating partner depended on trip duration.  This behaviour is consistent with strategies of long-lived species which favoured their own survival over their current reproductive attempt.  In addition, wind speed increased ground speed which in turn reduced trip duration and males foraged further away than females at high ground speed.

5. Contrasted against an independent dataset, the simulation performed satisfactorily for males but less so for females under current wind conditions.  The simulation predicted an increase in male body mass growth rate with increasing wind speed whereas females’ rate decreased. This trend may provide an explanation for the observed increase in mass of males but not of females.  Conversely, the simulation predicted very few nest abandonments, which is in line with the high breeding success of this species and is contrary to the hypothesis that wind patterns impact incubation success by altering foraging movement.” 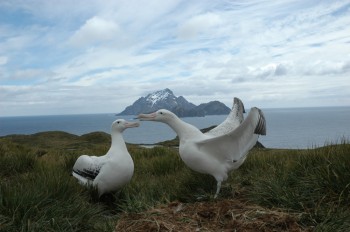