An Endangered Northern Royal Albatross Diomedea sanfordi with an injured left eye and in poor body condition found at Moa Point, near Wellington’s Airport, New Zealand last week was taken to Wellington Zoo by Department of Conservation workers.  The zoo’s avian specialist, Dr Baukje Lenting and her team operated on the injured bird in the veterinary hospital The Nest Te Kōhanga on Friday. 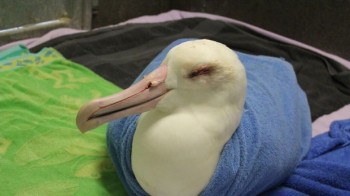 "The injured eye was too damaged to recover, so it was removed … to prevent the risk of infection."  A spokeswoman for the zoo said the bird was thought to be a female but vets were still working out its gender.  The zoo plans to nurse the bird back to full health and weight before releasing it back into the wild. 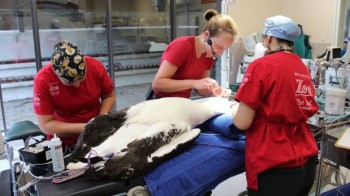 There are several cases of seemingly healthy one-eyed albatrosses, of at least four species, being photographed in the wild (click here).