A GigaPan Camera can take hundreds of individual photos that combine into huge panoramic images.  Initially designed for NASA (the USA’s National Aeronautics and Space Administration) the camera had been used a sports stadiums to photograph individual people, Fans can then tag themselves from among the many photographed (click here).

The technique is now being used to study Near Threatened Shy Albatrosses Thalassarche cauta on Albatross Island in the Bass Strait north of Tasmania following a successful five-day test (click here).  Following the test and some adaptations for the rugged environment the camera has now collected six months of images of albatrosses on the island with-two panoramic shots per day. 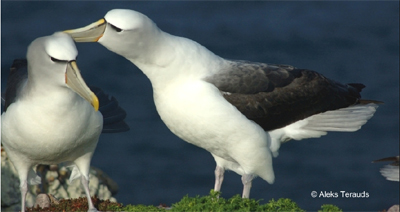 “Not only could [the researchers] zoom into specific nests on any given day, they also used software called Time Machine, which was developed by Carnegie Mellon University, to create months-long movies of each nest within the broader panorama.  The software allowed them to follow nests through the entire breeding season instead of just seeing it in person a few weeks a year.  They could play the movie backward and forward to find notable occurrences, such as when eggs hatched or why they failed.”

The GigaPan camera has now arrived back on Albatross Island for its second full breeding season.