Conservation actions proposed include “control and eradicate introduced predators (with particular emphasis on carnivores) in breeding colonies identified as at risk.  Thoroughly study the problem of bycatch by long-line fishing and develop awareness campaigns directed at the fishing sector, in order to mitigate this threat, plus assess and implement the appropriate mitigation measures.  Ensure effective protection for nesting sites and marine hotspots, and the implementation of monitoring schemes and management plans.  Develop a rapid response plan for a potential oil spill close to main feeding and breeding areas.  Raise awareness and stop human exploitation.  Study small pelagic fish populations in the western Mediterranean and in the Bay of Biscay to assess extent of overexploitation and how this affects the species.  Assess the impact of pollutants and heavy metals on this species.  Improve understanding of at-sea distribution, including during the non-breeding season.” 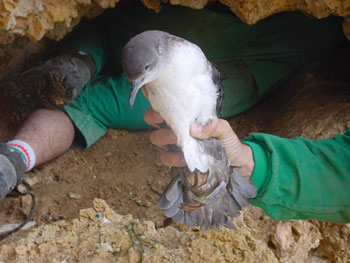 Balearic Shearwater in the hand, photograph by Daniel Oro

Conservation assessments are included in the red list for all the 15 procellariiform species that breed within the European region as defined, including the Yelkouan Shearwater P. yelkouan (click here) and four other Puffinus and Calonectris Shearwaters.