The ACAP-listed White-chinned Petrel Procellaria aequinoctialis is the bird most commonly recorded as fisheries bycatch by longline and trawl fisheries in the Southern Ocean.  Although currently listed as globally Vulnerable, it has been suggested that limited population trend data provide some grounds for uplisting the species to Endangered, with the decision dependent largely on better information from South Georgia (Islas Georgias del Sur)*, which is believed to hold more than half of the World’s population.  At Bird Island, there was a decrease of 28% (equivalent to 2% per year) in nesting burrow occupancy from the late 1970s to the late 1990s.

Based on existing tracking data, the greatest overlap between adult birds and fisheries, and therefore the greatest risk of bycatch, occurs on the Patagonian Shelf during the pre-laying period, and on the Patagonian Shelf and off southern Chile during the non-breeding period.  However, non-breeders (10 birds) have been tracked in only one year, and stable isotope analysis of feathers from a larger sample suggests that a small proportion also spend the winter in the Benguela Upwelling region off the west coast of southern Africa.  Nothing is as yet known about the movements of newly-fledged birds.

To remedy this gap in knowledge, 13 chicks were fitted with small satellite transmitters (PTTs, made by Telonics) last month on Bird Island and are being tracked in near real-time using the Argos system.  The tagging will enable monitoring of the routes they take as they search for food sources.  Their movements are being added to a map which is updated daily (click here).

The greatest risk to these birds lies on the Patagonian Shelf where most of them appear to be heading.  The distances covered in the first few weeks after fledging are already in excess of 9000 kilometres.  The tracking is part of a wider study that involves attaching geolocators to birds to track non-breeding movements and at-sea activity patterns of adults in the South Atlantic. 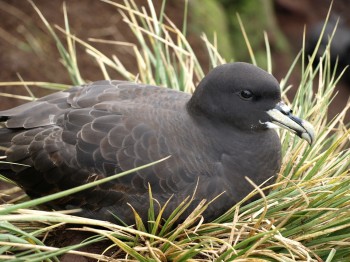 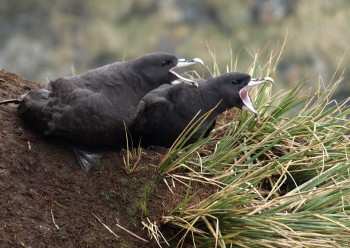 With thanks to Andy Wood, British Antarctic Survey, Cambridge, UK for information and photographs.