As a result, AFMA has implemented seabird management plans (SMPs) for all otter board trawl vessels operating in the Southern and Eastern Scalefish and Shark Fishery (SESSF). Each vessel’s SMP lists the AFMA approved seabird mitigation measures for that vessel, including the compulsory use of 600 mm diameter pinkies. 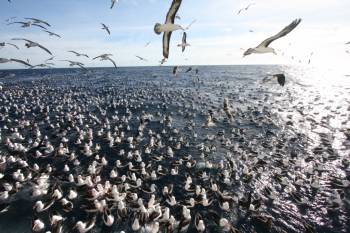 Black-browed Albatrosses gather behind a trawler, photograph by Graham Parker