Yuna Kim (Department of Biological Sciences, Macquarie University, Sydney, Australia) has been awarded her PhD for a study of the Vulnerable Gould’s or White-winged Petrel Pterodroma leucoptera on Cabbage Tree Island off New South Wales, Australia.  Techniques tested and used in her study of a burrow-nesting gadfly petrel are considered to have relevance to similar studies conducted on the five ACAP-listed Procellaria petrels, which also breed in burrows. 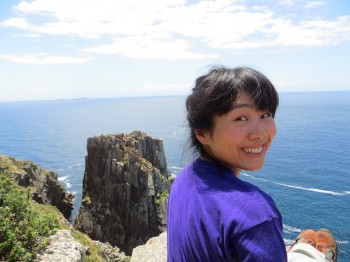 Yuna Kim on the top of Cabbage Tree Island

“Many seabirds experience threats in their environment when breeding and foraging in the highly variable marine ecosystems. Understanding breeding and foraging ecology is crucial to conserve threatened species.  The research presented in this thesis aimed to investigate the foraging ecology of Gould’s Petrel (Pterodroma leucoptera) on Cabbage Tree Island (CTI), New South Wales (NSW), Australia, to provide a knowledge base to inform the future conservation and management of this threatened species.  First, I validated my methods to ensure they were ethical and effective.  I found no detectable negative impact of using tracking devices on adult mass changes and associated chick growth and breeding success.  Second, I tested the reliability and practicality of four techniques (trapping adults, measuring mass change in chicks, examining images from infrared cameras and analysing temperature data from geolocators) to monitor nest attendance rates.  I concluded that temperature loggers featured within geolocators could be used to monitor nest attendance effectively.  Third, I explored the relationships between body mass, incubation shift duration and nest desertion and concluded that incubation success was limited by the condition of birds at the start of the shift and their tenacity to remain until relieved by their partner.  Lastly, but most importantly, I identified the core foraging areas of Gould’s Petrels during the breeding season, which were previously unknown.  In addition, I confirmed that Gould’s Petrels adopted a dual foraging strategy by measuring foraging trip durations and distances during the breeding season.  Examination of regurgitated stomach contents suggested diversity and variation in diet of the Gould’s Petrel, showing that it is an opportunistic forager, which is important to cope with variable environment.  These findings are discussed in relation to management of issues with a view to improving conservation strategies for this threatened species and, potentially, other small pelagic seabirds.” 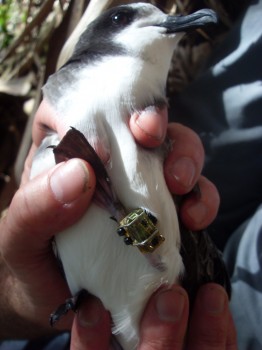 Gould's Petrel with a leg-mounted geolocator 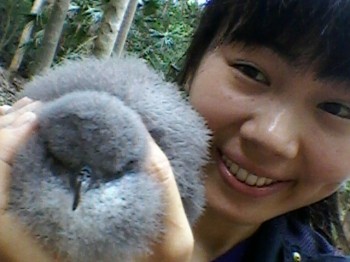 Gould's Petrel chick in the hand

In a preface to her thesis Yuna Kim concludes:

“I believe that the outcomes of my thesis contribute to the science base for identifying and mitigating threats to small seabirds.  I endeavour to contribute to an international collaborative research program aimed at characterising seabird hotspots and the identification of links between this community and the wider food chain to understand marine ecosystems under stress from overexploitation and global climate change.”

With thanks to Yuna Kim for information and photographs.