James Glass (Tristan Fisheries Department, Tristan da Cunha, South Atlantic Ocean) and Peter Ryan (FitzPatrick Institute, University of Cape Town, South Africa) published last year in the African Journal of Marine Science on seabirds coming aboard a rock lobster vessel at night in the waters of Tristan da Cunha in the South Atlantic.  Of ACAP-listed species occurring in Tristan waters only three Spectacled Petrels Procellaria conspicillata were recorded aboard and none died over a three-year period.

“The main impact of the fishery for Tristan rock lobster Jasus tristani on seabirds at the Tristan archipelago and Gough Island is through night strikes, when petrels collide with a ship after being disorientated by its lights.  Tristan fishery observers have kept records of night strikes on the MV Edinburgh since the 2010/2011 fishing season. Over the last three years, 723 seabirds from nine species were recorded coming aboard the fishing vessel, with at least 39 (5.4%) birds dying as a result. Birds killed were broad-billed prions Pachyptila vittata (41%), common diving petrels Pelecanoides urinatrix (23%), and storm petrels (Pelagodroma marina and Fregetta grallaria/tropica 36%).  All these species are listed as Least Concern globally, and the numbers killed per year are <0.1% of the island populations.  The captain and crew of the Edinburgh are aware of the problem posed by deck lights at night, and attempt to keep external lighting to a minimum.  As a result, the numbers of birds coming aboard vessels in this fishery have decreased from an average of 130 birds per night in 1989 to less than two birds per night in 2010–2013.  Currently, most incidents occur during exceptional events when circumstances require deck lights to be lit at night.  Consideration should be given to banning fishing operations at night, at least on misty nights.” 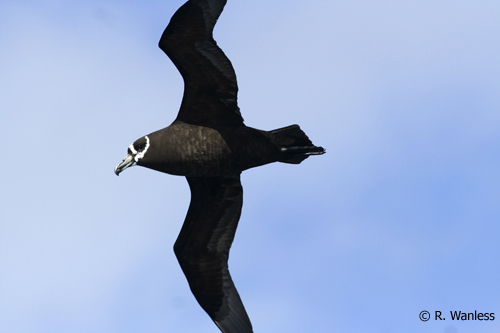