ACAP’s Executive Secretary, Warren Papworth to present a seminar in the USA next week on that country becoming a Party to the Agreement

“The U.S. has played an active role in the work of the Agreement on the Conservation of Albatrosses and Petrels (ACAP), participating in all of the preparatory meetings to negotiate the Agreement, as well as all the subsequent meetings held once the Agreement came into force in 2004.  Although President Bush transmitted the Agreement in 2008 (pdf) to the Senate for its advice and consent to accession, and the Departments of Commerce and the Interior submitted OMB-cleared proposed implementing legislation to Congress in 2009 (pdf), the United States has not yet become a party.

Fifteen of the 22 species of albatrosses are threatened with extinction, primarily due to high levels of mortality resulting from their bycatch in fishing operations.  Albatrosses are highly migratory species, with many having a circumpolar foraging range.  Consequently, it is not possible for one country alone to address this key threat, as it occurs not only in their territorial waters, but also on the high seas and in the territorial waters of other States.  It was for this reason that ACAP was established - to coordinate international action to address this threat.

The United States is a breeding Range State to the Agreement, having jurisdiction over the breeding sites for three species of albatrosses*.  In his presentation, Mr. Papworth will explain that the United States should join ACAP because it has demonstrated that it is an effective international organisation that has been successful in achieving conservation measures that will protect albatrosses outside the United States' jurisdiction e.g. in fisheries managed by regional fisheries management organizations (RFMOs) such as the Western and Central Pacific Fisheries Commission.”

The seminar is sponsored by the International Section of the NOAA Office of General Counsel.  It will be held from 12h00 – 13h00 in the NOAA Central Library, 2nd Floor, SSMC#3, 1315 East-West Highway, Silver Spring, Maryland. 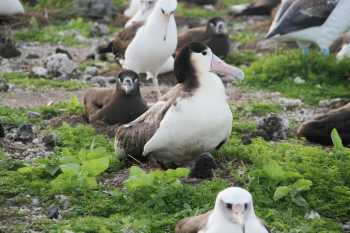 Shorty-tailed Albatross with chick in 2012 on USA's Midway Atoll

Click here for an earlier ACAP Latest News item on an on-line petition calling on the USA to become a Party to ACAP: now reached 3776 signatures.