“Black-browed albatrosses are the most abundant albatross species of the southern hemisphere, breeding on sub-Antarctic and Antarctic oceanic islands around the globe.  Their foraging habitat during the breeding season is reasonably well known along its distributional range, indicating a preferred use of waters <500 m deep.  The discovery of a colony inserted within the Admiralty Sound, Tierra del Fuego, poses an interesting challenge to the known precepts on foraging behavior for the species.  In this study, we present the first record on the foraging distribution of the only known inner-channel colony of albatrosses in the world, using high-resolution GPS loggers.  Black-browed albatrosses breeding at the Albatross Islet used exclusively inner-channel waters, at least during the chick-guard stage.  Our results indicate a significant smaller foraging range during chick-guard compared with conspecifics from Diego Ramirez and Falklands/Malvinas Islands.  Implications for the conservation of this colony are discussed.” 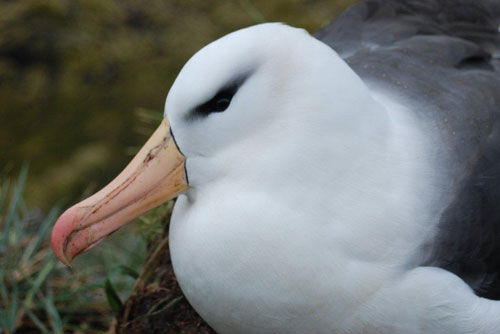