The public want to see fewer feral cats: a Hawaiian study where they prey upon the endemic and threatened Hawaiian Petrels and Newell’s Shearwaters

Cheryl Lohr and Christopher Lepczyk (Department of Natural Resources and Environmental Management, University of Hawai'i at Mānoa) write in the journal Conservation Biology on the public’s views on feral cats Felis catus in Hawaii, where they are significant predators of Vulnerable Hawaiian Petrels Pterodroma sandwichensis and Endangered Newell’s Shearwaters Puffinus newelli.  Both of these burrowing species are endemic to the Hawaiian Islands.  Trap-neuter-release (TNR) was the least preferred technique for managing feral cats.

“Feral cats are abundant in many parts of the world and a source of conservation conflict.  Our goal was to clarify the beliefs and desires held by stakeholders regarding feral cat abundance and management.  We measured people's desired abundance of feral cats in the Hawaiian Islands and identified an order of preference for 7 feral cat management techniques. In 2011 we disseminated a survey to 5407 Hawaii residents.  Approximately 46% of preidentified stakeholders and 20% of random residents responded to the survey (1510 surveys returned).  Results from the potential for conflict index revealed a high level of consensus (86.9% of respondents) that feral cat abundance should be decreased.  The 3 most common explanatory variables for respondents’ stated desires were enjoyment from seeing feral cats (84%), intrinsic value of feral cats (12%), and threat to native fauna (73%).  The frequency with which respondents saw cats and change in the perceived abundance of cats also affected respondent's desired abundance of cats; 41.3% of respondents stated that they saw feral cats daily and 44.7% stated that the cat population had increased in recent years. Other potential environmental impacts of feral cats had little affect [sic] on desired abundance.  The majority of respondents (78%) supported removing feral cats from the natural environment permanently.  Consensus convergence models with data from 1388 respondents who completed the relevant questions showed live capture and lethal injection was the most preferred technique and trap-neuter-release was the least preferred technique for managing feral cats.  However, the acceptability of each technique varied among stakeholders. Our results suggest that the majority of Hawaii's residents would like to see effective management that reduces the abundance of feral or free-roaming cats.” 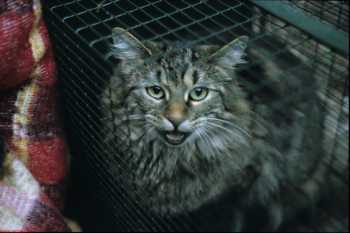 A feral cat gets caged, photograph by Jerome Legrand

Click here for an NGO view of the study.