International concern about the species is reflected in its recent listing as Threatened by the Committee on the Status of Endangered Wildlife (COSEWIC) in Canada and as of Common Concern by the Canada/Mexico/U.S. Trilateral Committee.  This has triggered several site-specific Conservation Plans for the species. In Chile, the Corporación Nacional Forestal (National Forestry Corporation) developed a National Plan of Action for the Pink-footed Shearwater in 2007.

A workshop was held in Valparaíso in the Instituto de Fomento Pesquero (Fisheries Development Institute) on 15 January.  The workshop’s main goal was to assess the status of the Chilean National Plan of Action for the Pink-footed Shearwater and share the state of knowledge for the species by reviewing the main activities implemented for addressing threats both on land and at sea. 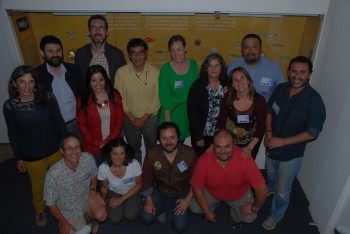 The discussions resulted in a schedule of activities which will have the dual purpose of developing the National Plan of Action based on the new scheme of the Chilean institutions and progressing the incorporation of the Pink-footed Shearwater into Annex 1 of the Agreement on the Conservation of Albatrosses and Petrels (click here).

A second meeting is due to be held in April this year at the Instituto de Fomento Pesquero.

With thanks to Jorge Azócar, Chile for information and the photograph.