The second season of hand-rearing Laysan Albatrosses Phoebastria immutabilis artificially hatched from translocated eggs on the Hawaiian Island of Oahu is going well.  Twenty chicks (from eggs collected on the nearby island of Kauai) are now being hand fed in the James Campbell National Wildlife Refuge, where 10 successfully fledged the previous season (click here).  The reserve is not open to the public and a planned predator-proof fence will enhance security.

“In year three we will begin bringing Black-footed Albatrosses [P. nigripes] in hopes of establishing the first main Island colony of this species” (click here). 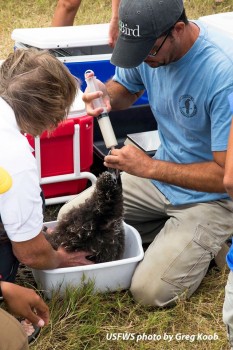 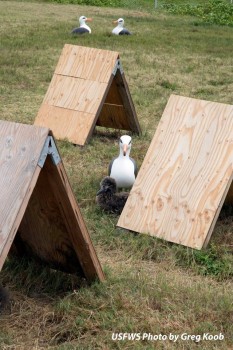 Read more in ACAP Latest News about the background and history of this innovative conservation effort by Pacific Rim Conservation, the first to use eggs, rather than chicks, collected in the wild.

Meanwhile, police investigations continue into finding the culprits who killed breeding Laysan Albatrosses in the Kaena Point Natural Area Reserve on Oahu in December last year with no reported arrests as yet (click here).