Mice on Maud: a New Zealand island successfully used for seabird translocations may be in trouble

Maud Island/Te Hoiere (310 ha) in the Marlborough Sounds of New Zealand’s South Island is a scientific reserve administered by the Department of Conservation (DOC) as a predator-free island sanctuary for native species – since its introduced Stoats Mustela erminea were eradicated in the 1990s.  Maud Island is closed to public access without a permit because of its importance as a native wildlife sanctuary.

Over the years chicks of three species of burrowing procellariiform seabirds (Fluttering Shearwater Puffinus gavia, Common Diving Petrel Pelecanoides urinatrix and Fairy Prion Pachyptila turtur) have been successfully translocated to the island, hitherto thought to be free of rodents.

News from DOC last week is that mice have been found on the island following searches with trained rodent-detection dogs, surviving in the presence of rodent traps and poison bait stations.  It is not known how the mice arrived, given the biosecurity protocols in place, but tightening up of these is now being considered.  “The mouse infestation may have started with just one pregnant female”, perhaps from an illegal landing. 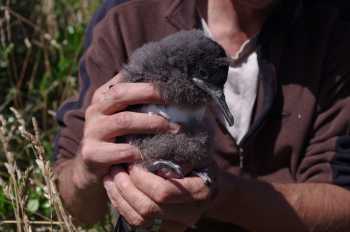 “To be sure of success in eliminating all the mice we need to hold off an eradication operation until next winter when food for mice would be scarce and they would be more likely to eat the poison baits.  We will do all we can in the meantime to limit the impacts of the mice on endangered species”.  Also at risk are native invertebrates, reptiles and amphibians.

Gaze, P. & Cash, B. 2008.  A history of wildlife translocations in the Marlborough Sounds.  DOC Occasional Publication No. 72.  Wellington: Department of Conservation.  23 pp.