This year the survey was repeated during the annual relief of the South African weather station with 222 incubating birds counted this month.  The lower number reflects the fewer pairs (49 as against c. 85 last year) found in “Giant Petrel Valley” in the north of the island.  However, the Low Hump colony (where a demographic study with colour-banded birds is going into its fourth year) had a few more nests with eggs (173 as against 166), probably because nest staking commenced earlier than in 2012, thus capturing some early failures. 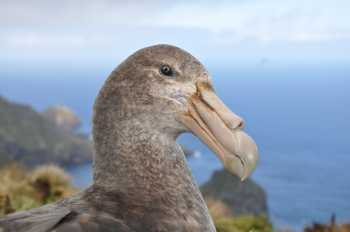 Research on Southern Giant Petrels on Gough has been funded by the UK's Overseas Territories Environment Programme via the Royal Society for the Protection of Birds and the FitzPatrick Institute, University of Cape Town and by a Captain Simpson Fellowship of the Royal Naval Birdwatching Society awarded to John Cooper in 2010.  Activities ashore are conducted with the approval of the Tristan Conservation Department and are supported logistically by the South African Department of Environmental Affairs.