ACAP Breeding Sites No. 34. The main island of Tristan da Cunha: inhabited by both albatrosses and islanders

The Tristan Archipelago lies in the central South Atlantic approximately 2700 km west of South Africa.  It forms part of the United Kingdom Overseas Territory of St Helena, Ascension and Tristan da Cunha.  The inhabited main island of Tristan is the most northerly of the group; at 37ºS the climate is cool temperate though summer temperatures can reach 25ºC.  Tristan is a classic volcanic cone which last erupted in 1961.  With an area of c. 96 km² it is roughly circular with an approximate diameter of 12 km.

The highest point, Queen Mary’s Peak, reaches 2060 m and in winter is often snow covered though snow rarely falls at sea level.  The island’s current permanent human population is 259, living in the single settlement of Edinburgh of the Seven Seas (click here).  The Tristan islands have been designated an Important Bird Area and an Endemic Bird Area by BirdLife International (click here).

The majority of Atlantic Yellow-nosed Albatrosses breeds around the “Base” between approximately 400 and 800 m though some pairs are found at much lower altitudes, below 50 m on inaccessible slopes away from the settlement plain. Tristan is thought to hold the largest population of this species in the archipelago, estimated in 1974 at c. 16 000 - 30 000 pairs (although there is no more recent estimate).  Adults return in August and the last fledglings depart at the end of April with most adults breeding annually.  A long-term study site between Hottentot Gulch and Caves Gulch is monitored in most years by Tristan Conservation Department staff and visiting scientists to determine adult survival rates and recruitment into the population.

All photographs by Bard Robson unless stated

Roughly 2000 - 3000 pairs of Sooty Albatrosses are thought to breed annually on Tristan.  Nest sites typically are on precipitous edges allowing ready access to the air.  Although the majority of nests is concentrated around 400 - 500 m on the edges of the Base and steep gulches, some are also found below 50 m in the south-eastern part of the island.  Adults arrive at nesting sites at the end of August and depart in mid-May.  Successfully breeding pairs do not usually breed in the following year.  Monitoring is problematic because of access to remote parts of the island and the height of nest sites above vantage points from the sea or lowland areas.  Both species were formerly collected for food by the Tristan Islanders but both are now fully protected under the Tristan Conservation Ordinance of 2006. 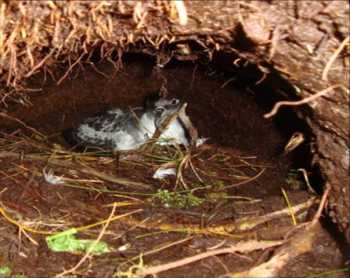 A Grey Petrel in its burrow on Gough Island.  Photograph by Kalinka Rexer-Huber

It is likely the winter-breeding and ACAP-listed Grey Petrel Procellaria cinerea still breeds on Tristan in the face of introduced predators such as feral cats Felis catus (now extinct) and Black or Ship Rats Rattus rattus as birds have been seen flying inland and out to sea from the island in the last few years.  The island’s population was roughly estimated as 50-100 pairs during 1972-1974 when six chicks in burrows were found. 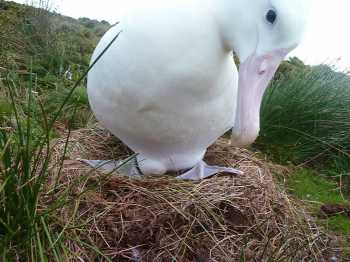 In the past two further ACAP-listed species (Tristan Albatross Diomedea dabbenena and Southern Giant Petrel Macronectes giganteus) bred on Tristan, but no longer do so due to a combination of exploitation, disturbance and habitat loss.

See ACAP Breeding Site accounts for the other three islands in the Tristan group: Gough, Inaccessible and Nightingale.

Brown, D. 2007.  A Feasibility Study for the Eradication of Rodents from Tristan da Cunha.  Sandy: Royal Society for the Protection of Birds.  36 pp.