Following Pink-footed Shearwaters at sea. The next ACAP-listed species?

The Pink-footed Shearwater Puffinus creatopus may be next procellariiform species to be listed by the Albatross and Petrel Agreement (click here).  Research on at-sea movements of this the Chilean endemic is underway as reported below. 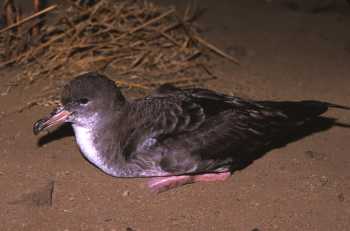 “The Pink-footed Shearwater’s (PFSH) population is in decline.  In an effort to better under­stand their declining numbers, a team of scientists from Chile, the United States, and Canada are investigating the migratory habitats and behaviors of the PFSH by tracking their move­ments throughout the year.  This real-time tracking project involves six breeding shearwaters, four of which have already begun their long migration from the Chilean mainland and Isla Mocha to Peru and North America.  Ten more PFSHs will be deployed with trackers from California this summer.  This satellite tracking technology is being used to map and better understand their foraging behaviors and important feeding locations.

Incorporating this information with wind patterns and oceanographic conditions can help scientists to better understand these birds’ dynamic and circumstantial behavior.  “Satellite tracking data will shed light not only on current at-sea threats but also provide preliminary information about the relationship of these birds with conditions at sea that may respond to variation in marine climate,” said Valentina Colodro, a biologist with Oikonos Ecosystem Knowledge, who attached the transmitters in early April.  Evaluating these locations may also reveal where the PFSH may be most at risk of mortality from human interactions.  The transmitters are expected to operate until this fall when the PFSH reach their breeding grounds once again in Isla Mocha.

During the non-breeding season, the PFSH ranges from Chile all the way up to Canada and transverses territorial waters of 13 different countries.  However, they can only be found on 3 Chilean islands during the breeding season (Isla Mocha, Robinson Crusoe, and Santa Clara).  Their biggest known threats include predation by non-native mammals, entanglement/hooking by fishing gear, habitat destruction, and the illegal harvesting of eggs.  Because of this, the Pink-footed Shearwater is a listed as a species of concern in several countries.