ACAP Breeding Sites No. 21. Heard Island, the only sub-Antarctic island with an active volcano 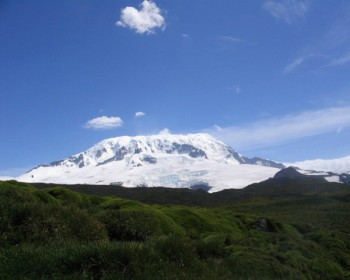 Australia’s sub-Antarctic Heard Island is situated in the southern Indian Ocean.  It covers about 368 km².  Its highest peak is Big Ben, shown here, an active volcano 2745 m high.  The island’s climate is strongly influenced by its mountains and the permanent ice cover. In 1947, the glaciers covered some 70% of the island’s surface but are now retreating.  The island is usually covered in low cloud bringing frequently rain and strong winds.  Along with the nearby McDonald Islands it is an Australian Commonwealth Marine Reserve (which includes surrounding waters extending in some directions to the Exclusive Economic Zone boundary) established in 2002 and has been a World Heritage Site (which includes territorial waters) since 1997.  Heard has supported four species of ACAP-listed albatrosses and petrels, although one of them may no longer breed. 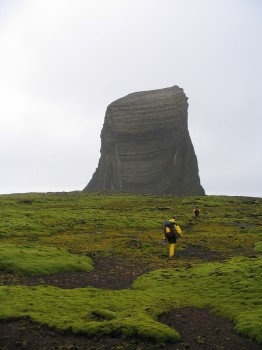 Rogers Head is a prominent headland at the northern end of the peninsula between Atlas Cove and Corinthian Bay.  It was named after the Rogers family. Captain E.D. Rogers was the first to land at Heard Island in 1855 and Captain J.H. Rogers led the first wintering party to the island. 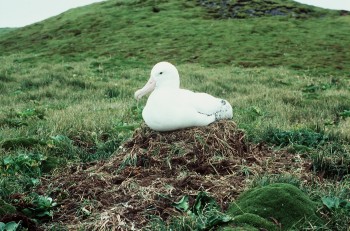 Photograph taken in 1980 by the late Gavin Johnstone

In 1980, a male Wandering Albatross Diomedea exulans banded at Macquarie Island was sighted on a nest.  In January 2001 only a nest mound was found.  Whether the species continues to occur on Heard is currently unknown. 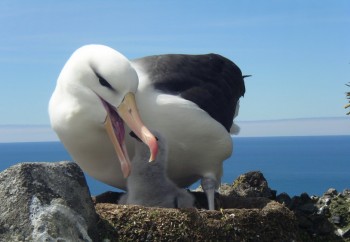 Around 600 pairs of Black-browed Albatrosses Thalassarche melanophris breed at Heard Island in four distinct colonies three of which are situated on the Laurens Peninsula in the north and one colony is at Henderson Bluff on the west coast of the island.  Another 100 pairs are probably located at the nearby McDonald Islands.  Black-browed Albatrosses tend to forage in the waters around Heard Island during chick rearing although some birds make trips towards the Kerguelen Archipelago to the north. 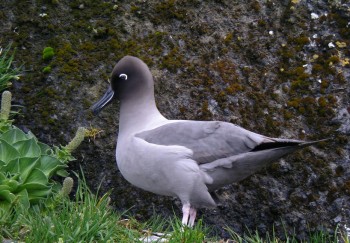 Light-mantled Sooty Albatrosses Phoebetria palpebrata forage along the southern boundary of the Antarctic Circumpolar Current during chick-rearing, well south of the island.  Some 500 pairs are estimated to breed on Heard in about 10 colonies around the island.  Precise numbers are difficult to obtain because of the steep and often inaccessible terrain where they nest. 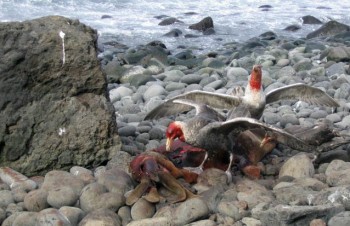 Photographs by Barbara Wienecke unless stated

Approximately 3000 pairs of Southern Giant Petrels Macronectes giganteus breed at Heard Island.  Here some adults found a young Southern Elephant Seal Mirounga leonina that fell off a cliff.  It only took a few hours for the carcass to be reduced to skin and bones.

Click here to read more about Heard and McDonald Islands.