ACAP Breeding Sites No. 20. New Island, a wildlife sanctuary in the South Atlantic 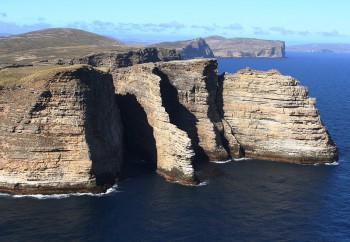 An aerial view of Landsend Bluff on the west coast of New Island.  Sheer cliffs rising over 200 metres dominate this side of the island and form breeding sites for ACAP-listed and Endangered Black-browed Albatrosses Thalassarche melanophris.  New Island is the most westerly island in the Falkland Islands (Islas Malvinas)*.  The island has a coastline of roughly 84 km and is approximately 13 km in length.  New Island was first established as a private nature reserve in 1972.  It is also an Important Bird Area and a site for research on its seabirds.  In 2006 the island came under the single management of the New Island Conservation Trust, a non-profit, charitable conservation body, with small-scale tourism allowed. 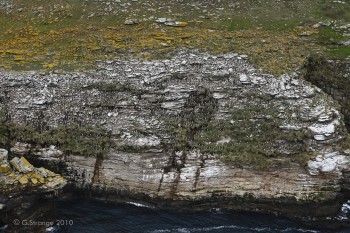 Aerial view of one of the Black-browed Albatross colonies on New Island.  Aerial photographic survey methodology was adopted due to the formidable terrain making more conventional ground surveys virtually impossible.  In the last aerial photographic survey in 2010 a total of 14 487 adult pairs occupying nests was counted on New Island.  The total count for the Falkland Islands (Islas Malvinas)* was then 475 465 pairs. 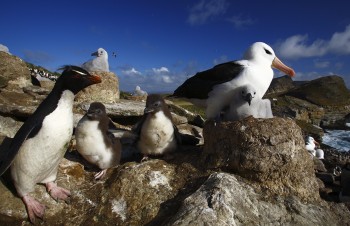 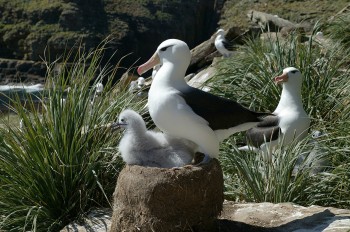 An adult Black-browed Albatross with its chick in one of the New Island colonies.  On this particular site the albatrosses nest amongst Tussac Grass Parodiochloa flabellata without any other colony-nesting species.  The large nest shown here suggests the site has been used for a considerable number of years. 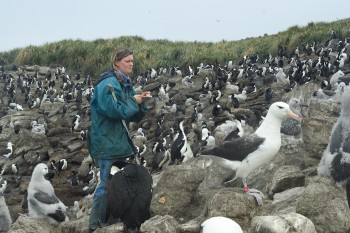 A researcher works in a mixed colony of Black-browed Albatrosses, Southern Rockhopper Penguins and King Cormorants on New Island.  Research on albatrosses on New Island has been carried out over a period of 35 years.  Annual counts of breeding pairs on one of the main colonies, which commenced in 1975, have shown an increase of over 136%, or 4.1% a year to the present time.

Wolfaardt, A.[C.] 2012.  An Assessment of the Population Trends and Conservation Status of Black-browed Albatrosses in the Falkland Islands.  23 pp.