ACAP Breeding Sites No. 8. Beauchêne Island in the South Atlantic supports over 100 000 pairs of Black-browed Albatrosses

Beauchêne Island is the southernmost and most isolated of the Falkland Islands (Islas Malvinas)*. Its coastal cliffs are here viewed from the yacht Saturnin in 2010. The 187-ha island is approximately 3 km long and 1 km wide at its widest point. Given its remote and pristine nature, the island is seldom visited. It has been a National Nature Reserve since 1964 and is an Important Bird Area (IBA).

The view here is of the southern section of the island, known as The Citadel, looking northwards to the main seabird breeding area. Much of the island is covered in dense Tussac Grass Parodiochloa flabellata.

Beauchêne supports in excess of 100 000 breeding pairs of Black-browed Albatrosses, with an aerial census in 2010 of 105 777 pairs comparing with 139 336 pairs based on density and area of occupancy estimates made later in the same year. 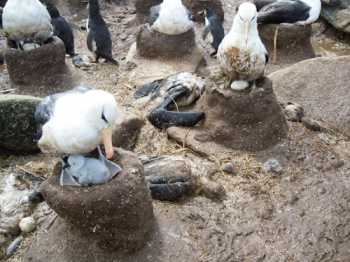 A severe storm in December 2010 caused the death of at least 300 adult Black-browed Albatrosses and the failure of c. 25 000 breeding attempts (click here).

Wolfaardt, A., 2012. An Assessment of the Population Trends and Conservation Status of Black-browed Albatrosses in the Falkland Islands. 23 pp.