That albatrosses in the Southern Ocean can become entangled in fishing line (and trawl warps) at sea is well known (click here for a New Zealand example).  Some of these birds manage to get back to their breeding islands, where, if they are fortunate, they are caught and the entangled line (often ending in a fish hook) removed.  What is less expected is for southern albatrosses to become entangled at their remote breeding sites.

South Africa's Marion Island is part of a Special Nature Reserve in the southern Indian Ocean that is managed as a de facto wilderness area.  Away from the weather/research station on the east coast there is little but nest markers in study colonies to be seen that are not natural.  Exceptions are the eight coastally-situated field huts used by field researchers and conservation officers.  These huts have recently been equipped with new radios for communication and for safety purposes.  To ensure good "comms" the radios have aerials consisting of four thin steel cables running out (and down) from a central antenna mast fixed to the huts to low anchor posts about 15-20 metres away (see photo below).

Two of the field huts situated on the island's west coast are within areas frequented by breeding Wandering Albatrosses Diomedea exulans, with a handful breeding within 50 metres of the huts.  On 21 December 2011 the field hut at Swartkop Point was visited by Anton Feun of the 68th Overwintering Team.  On arrival he found an adult Wanderer had become tightly entangled around its wings and legs in more than eight metres of one of the four aerial wires that had been originally installed in April 2011.  Finding it impossible to undo the knotted tangles he cut the wire away but as soon as he had completed the task the bird died.  The previous visit to the hut had been 16 days earlier so the bird may have been entangled for quite some time.  It is not known whether the bird originally walked into the wire or flew into it; although the latter may be suspected, given the force required to break the plastic cord connection to the anchor post. 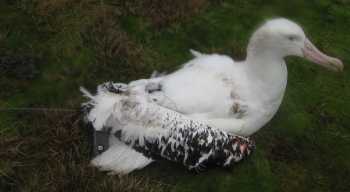 The entangled Wandering Albatross at Swartkop Point, Marion Island before release.
The aerial wire can be discerned on the left of the photographs 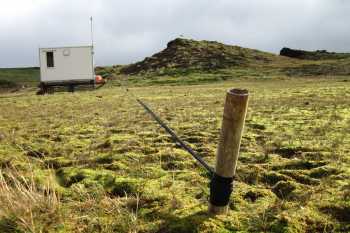 Consideration is now being given as to how to avoid this unfortunate incident being repeated.  Heightening the low-running wires should get them out of the way of walking Wandering Albatrosses.  Howver, this will not halt strikes by flying birds (including by burrowing petrels such as Blue Petrels Halobaena caerulea at night, as is known to occur at Swartkop Point).

In the past plastic discs (made out of food container lids) cable-tied to the aerial wires at intervals that flapped in the wind have been trialled with an earlier radio set-up at the Swartkops Hut.  But they are unlikely to last very long - given the very high winds regularly experienced, and are not likely to be much of a deterrent on dark nights.  A system whereby the aerial wires are kept safely coiled at the two west-coast huts when they are not being visited, being erected only for the daily evening "skeds" with the base on the other side of the island, has been proposed, and if adopted, should solve the problem.

With thanks to Anton Feun for information and photographs.