Light-mantled Albatrosses seen at sea within the Bransfield Strait, Antarctica could be local breeders

The Light-mantled Albatross Phoebetria palpebrata has a circumpolar distribution in the Southern Ocean and exhibits the most southerly distribution of all the albatross species.  It generally stays near or below the Antarctic Polar Front, dispersing as far south as 77-78ºS in the Ross Sea and south of 60ºS elsewhere around the Antarctic Continent, regularly venturing to the edge of the pack ice.

On 17 December 2011 up to five Light-mantled Albatrosses were seen repeatedly over two hours and photographed by Juan Pablo Seco Pon flying close by and on the surface from the m.v. Corinthian II while steaming from the east coast of the Trinity Peninsula, Antarctica in the Bransfield Strait between the South Shetland Islands and the Antarctic Peninsula at 63º 03'S, 57º 59'W.  The Trinity Peninsula is the extreme northern portion of the Antarctic Peninsula.  These records seem to be at or close to the edge of the species' known southerly range within the region.

In the austral summer of 2008/2009 a breeding colony of Light-mantled Albatrosses (c. five pairs) was discovered on a small offshore rock ("Flat Top") connected to the Fildes Peninsula, King George Island, South Shetland Islands at 62° 12'S, 59° 01'W (click here).  This is the southernmost breeding locality of any albatross species recorded, and the only one within the area of the Antarctic Treaty System (ATS; south of 60°S) and thus falling outside a national authority.  The only other ACAP-listed species known to breed within the ATS region is the South Giant Petrel Macronectes giganteus (click here). 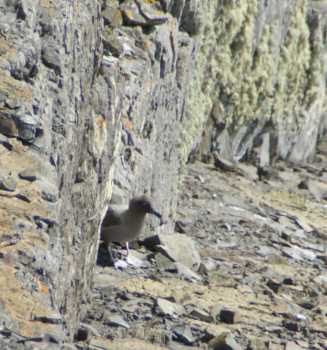 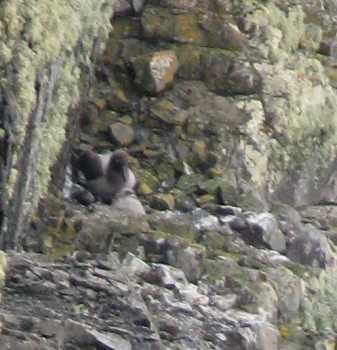 The five albatrosses seen from the Corinthian II would have been well within the foraging range of this colony, although they could just as well have come off from breeding colonies farther north on South Georgia (Islas Georgias del Sur)*.

The Light-mantled Albatross usually appears to forage alone or in small groups of less than five birds, as supported by the observations presented here.  It was surprising to observe the birds flying close to the vessel (sometimes within two metres), as the species is not known to be particularly attracted to ships when compared to most other albatross species.

Click here to access the ACAP Species Assessment for the Light-mantled Albatross which summarizes its known at-sea distribution.

With thanks to Simeon Lisovski and Hans-Ulrich Peter for information and photographs.