Yukiko Aoyama (Department of Environmental Life Sciences, Tohoku University, Japan) and colleagues have looked at the numbers of seeds stuck to the plumage of Black-footed Albatrosses Phoebastria nigripes and Wedge-tailed Shearwaters Puffinus pacificus (and two other seabird species) at Japan's Ogasawara Islands.  Publishing in Biodiversity and Conservation they conclude that seabirds are effective dispersers of seeds of both native and introduced plant species and that "tourism on uninhabited islands should be very carefully managed because other islands might become indirect recipients of introduced plants via seabird dispersal."

"Previous studies have shown that the dispersal of plant seeds to oceanic islands is largely attributable to birds.  However, few studies have assessed the role of adhesive dispersal by birds even though this mechanism has long been recognized as a major vector of seed transport.  Some data point to the possibility that adhesive transport by seabirds transfers alien plant seeds in island ecosystems.  In the present study, we examined the seed-dispersing ability of seabirds among islands in the oceanic Ogasawara Islands, Japan.  We used capture surveys to examine the frequency of seeds adhering to seabirds and tested the salt tolerances of the seeds.  The distributions of the plant species were examined and the relationships between plant and seabird distributions were analyzed using generalized linear models.  Seeds of nine plant species, including aliens, were detected on 16-32 % of captured seabirds.  Seeds included those generally considered to be dispersed by wind or internally transported by birds in their guts.  Seeds exposed to NaCl solution isotonic with seawater for up to 8 h suffered little or no loss of viability.  Analyses of plant distributions demonstrated positive relationships between the distributions of some plants and seabirds.  These results show that seabirds effectively disperse seeds of both native and introduced plant species.  This is the first study to comprehensively assess adhesive seed dispersal by seabirds; it provides essential information on long-distance dispersal." 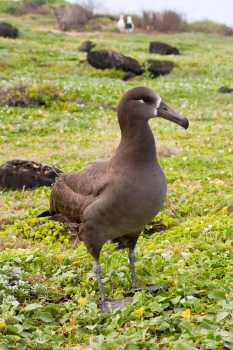