Bruce Pearson, painter and print maker, is about to publish a book detailing his life-long fascination for the sea and seabirds.  Having journeyed a number of times across the Southern Ocean, his aim is to paint a portrait that brings the open sea vividly to life in the mind's eye and imagination.

"As an artist fascinated by wildlife and the natural world I work as often as the opportunities arise out in the wild where the rhythm and restlessness of wildlife and elemental landscapes - and sometimes people - interact creating powerful images and dramatic themes."

A Shy Albatross chases a White-chinned Petrel by Bruce Pearson

A trawler trails a bird-scaring line by Bruce Pearson 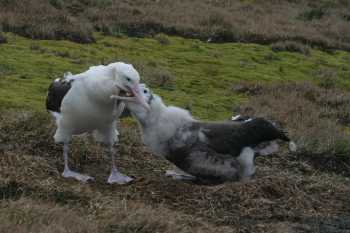 The book launch is to be followed by an exhibition in support of BirdLife International's Save the Albatross Campaign from 26 November to 1 December at the Artspace Gallery, Maddox Street, London UK.

It is intended to carry a review of Bruce Pearson's book once it is published.