"Theoretical and empirical studies have highlighted the effects of age on several life-history traits in wild populations.  There is also increasing evidence for environmental effects on their demographic traits.  However, quantifying how individuals differentially respond to environmental variations according to their age remains a challenge in ecology.  In a population of Black-browed Albatrosses monitored during 43 years, we analyzed how life-history traits varied according to age, and whether individuals of different ages responded in different ways to environmental conditions.  To do so, we: 1) examined how age affected seven life-history traits; 2) investigated differences in temporal variance of demographic traits between age-classes ; and 3) tested for age-dependent effects of climate and fisheries covariates on demographic traits.  Overall there was a tendency for traits to improve during the first years of life (5-10 years), to peak and remain stable at middle age (10-30 years) and decline at old ages.  At young ages, survival and reproductive parameters increased, except offspring body condition at fledging, suggesting that younger parents had already acquired good foraging capacities.  However, they suffered from inexperience in breeding as suggested by their higher breeding failures during incubation.  There was evidence for reproductive and actuarial senescence.  In particular, breeding success and offspring body condition declined abruptly suggesting altered foraging capacities of old individuals.  Middle-aged individuals had the lowest temporal variance of demographic traits.  Although this is predicted by the theory of environmental canalization, it could also results from a higher susceptibility of young and old birds due to their respective inexperience and senescence.  The highest temporal variances were found in old individual.  Survival was significantly influenced by sea surface temperatures in the foraging zone of this albatross population during breeding.  During warm events survival of young and old individuals improved, whereas a decrease was observed for middle-aged individuals. Presumably, during cold years with poor environmental conditions, young and old breeding birds may suffer more from intra-specific competition for resources than middle-aged individuals.  This study showed that age, known as a major factor structuring demography in long-lived species can also potentially influence the response of populations to global change." 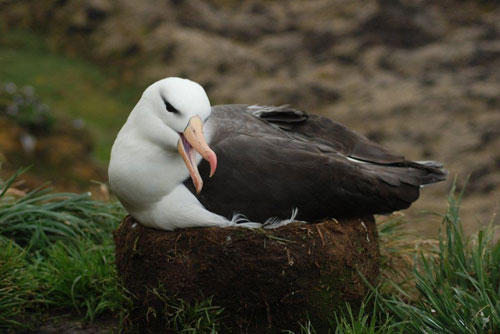