The Eighth Session of its Scientific Committee (WCPFC-SC8) of the Western and Central Pacific Fisheries Commission (WCPFC) held in Busan, Korea in August 2012 recommended that a spatial management approach be employed for seabird mitigation and that the Commission when revising CMM-2007-04 (Conservation and Management Measure to Mitigate the Impact of Fishing for Highly Migratory Fish Stocks on Seabirds) requires southern-hemisphere fisheries south of 30°S to use at least two of three best-practice measures: bird-scaring (tori) lines, night setting and  weighted branch lines (click here).

The Ninth Regular Session of the Commission will meet next month in Manila, to consider the recommendations made by its Scientific Committee and its Technical Compliance Committee.  According to the provisional annotated agenda for the meeting, consideration will be given to revising CMM 2007-04, with New Zealand having taken the lead in preparing for discussion a paper (WCPFC9-2012-DP-16) that proposes the "two of three mitigation measures" approach. 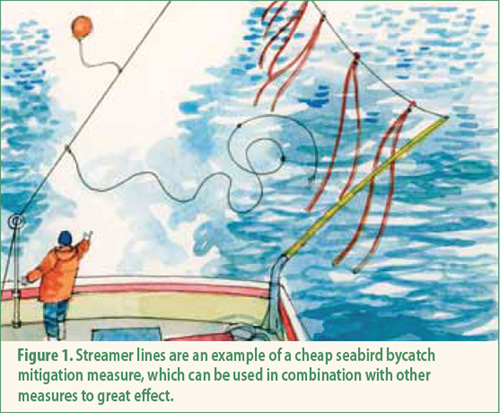 ACAP will be represented at the meeting by its Executive Secretary, Warren Papworth.