Lorna Deppe has been awarded her PhD by the University of Canterbury, Christchurch, New Zealand for her study of spatial and temporal patterns of at-sea distribution and habitat use of three species of Albatrosses endemic to New Zealand: Northern Royal Diomedea sanfordi, Buller's Thalassarche bulleri and Chatham T. eremita.

"Albatross populations are currently in decline around the world.  Survival and reproduction of these large pelagic birds depends mostly on the conditions they encounter in their marine environment.  Their ability to range far across ocean basins exposes them to a variety of anthropogenic threats.  It is thus crucial to understand spatial and temporal patterns in the distribution and habitat use of each albatross species during different stages of their annual cycle in the context of seasonally changing demands as well as environmental constraints, in order to develop effective conservation measures.  Using Global Location Sensing (GLS) loggers I investigated the non-breeding movements and habitat associations of three threatened or near-threatened albatross species breeding in New Zealand's Chatham Islands, the Chatham Albatross (Thalassarche eremita), Northern Buller's Albatross (T. bulleri platei) and Northern Royal Albatross (Diomedea epomophora sanfordi), within South American waters.  Chatham and Northern Buller's Albatrosses mainly occupied waters with mean sea surface temperatures (SST) of 17-18ºC along the coasts of Chile and Peru, while Northern Royal Albatrosses were mostly found in 10-12ºC waters off southern Chile and Argentina.  Monthly movement patterns were linked to seasonal shifts in temperature range, suggesting SST was an important environmental factor in explaining the observed spatial and temporal patterns.  GLS loggers were also applied to study the patterns of movement and habitat use of Chatham Albatrosses when migrating across the South Pacific between breeding and non-breeding grounds.  The route and timing of migration were consistent over the three year period of the study, although subject to individual variation.  Stopovers on migration were found to be common, lasting between 3 and 26 days.  Activity patterns suggested that birds stopped in order to forage en route.  Lastly, I used high resolution Global Positioning Sensing (GPS) loggers to address the fine-scale movements and habitat selection of foraging Chatham Albatrosses over three years during early chick rearing.  This is a time when their behaviour is expected to respond to increased energetic demands as they are feeding young chicks.  Foraging trips lasted between 1 and 6 days and the foraging range rarely exceeded 400 km.  The location of potential foraging spots varied between years, but followed non-random patterns in bathymetry, slope, SST and Chlorophyll a.  The results presented here suggest that albatrosses rely on predictable habitat features but are flexible to respond to fine scale changes within their marine environment.  The dynamic nature of both birds and environment may prove challenging but has to be taken into account in conservation planning." 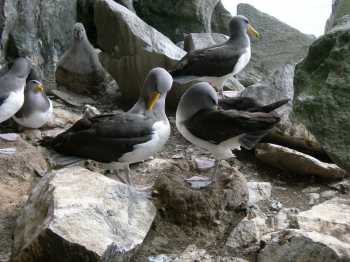 Chatham Albatrosses breeding on the Pyramid
Photograph by David Thompson

With thanks to This email address is being protected from spambots. You need JavaScript enabled to view it. for information.